Iris was the matriarch of her family. She lived life to the full and enjoyed spoiling everyone at Christmas and on birthdays. She was a friend, a babysitter, a role model and a woman who had overcome cancer twice.

Growing up in the same town as his grandparents, Dan developed a strong bond with them both. They enjoyed holidays to Devon and Ibiza together and Dan even lived with them for one summer in between university terms.

Dan was in secondary school when Iris was diagnosed with breast cancer, she had a single mastectomy as part of her treatment. Her wicked sense of humour allowed her to make light of the situation and through this her resilience and strength shone through. There even became a running family joke that ‘Nan had left her breast prosthesis lying around the house again’.

Dan kept a close relationship with his grandparents through adulthood and visited them weekly with his Wife. They enjoyed watching TV together, with the airing of Wimbledon being a particular highlight.

Iris fought and overcame her breast cancer, but just over a decade later, she was diagnosed with ovarian cancer. Once again, Iris faced her battle head-on and underwent a hysterectomy at the age of eighty-five.

Two years later, by Christmas 2016, the cancer had spread to her stomach. The risk of complications from an operation were too high. The only option was to manage Iris’s pain and keep her as comfortable as possible through palliative care.

Although Iris remained upbeat, as Dan looked on he felt the magnitude of the disease. Witnessing it having such an effect on a loved one, he says, reaffirmed the importance of verbalising your love for those closest to you and treating each day as if it’s the last.

Despite her superwoman strength and determination to fight, in February 2017, sadly Iris passed away.

Iris was an active fundraiser for breast cancer charities throughout her life and her legacy continued at her funeral. The men in attendance wore pink ties and pink ribbon pin badges were sold in aid of Against Breast Cancer.

In memory of Iris, Dan decided to fundraise for Against Breast Cancer by abstaining from alcohol and junk food for the entire Wiltshire League cricket season, spanning April through to September. 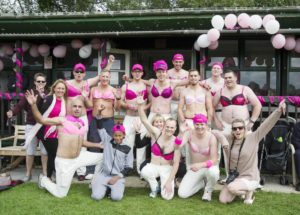 In memory of Iris, Pink Saturday

As well as raising vital funds and awareness for Against Breast Cancer, he noticed some personal benefits through the changes he made to his diet and lifestyle; he lost 1 stone 10 lbs and had his best cricket season to date with 500 runs and 15 wickets. He also found that he had more energy to help his wife with their firstborn son’s night feeds.

Dan also helped organise a Pink Saturday cricket event at Swindon United Churches’ ground. The players wore pink caps which matched the pink ball and pink stumps. During the tea break, the players took part in a 100 metre sprint wearing only pink bras on their top half. The day was then rounded off with a rock’n’roll bingo at The New Inn, Stratton.

In all, Dan has raised over £2,500 and increased awareness of secondary spread breast cancer. But perhaps most importantly, he has accomplished his ultimate aim of paying a heartfelt tribute to his beloved Nan in his own, inimitable way.