Elaine has been a fan of The Duallers ever since she saw a video of lead singer Tyber busking on Facebook. When she saw the T-shirt they were selling in aid of Against Breast Cancer throughout Breast Awareness month, she felt urged to buy one. 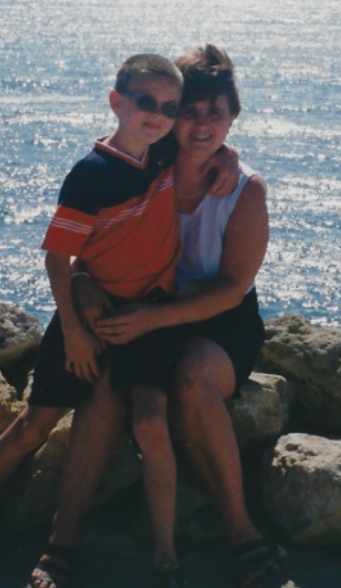 I was first diagnosed with breast cancer in 2002, at the age of thirty-three, after finding a lump on holiday in Cyprus.

Self-examination was something I always did; I almost had a sixth sense that it was important. And it was, as when I found the lump whilst applying aftersun lotion, I knew the lump wasn’t there when I last checked myself.

It was a bolt from the blue, but I tried to make it as easy as possible for my son Tristan who was eleven at the time. I made sure I was completely open with him from that moment forward.

I booked an appointment when I arrived home from holiday and I was referred to the breast care team. I had a needle aspiration, ultrasound and mammogram in the morning and went back in the afternoon to be told that cancerous cells had been found so a core biopsy was needed.

I was diagnosed with grade 3, triple negative breast cancer. That was a Wednesday, I had my preop on the Friday and on the Monday, I had my lumpectomy with full lymph node clearance. It was incredibly quick.

I went back into work the day after my diagnosis, but my boss insisted I go home and not come back until my treatment had finished. The same day, I phoned Tristan’s school so they were aware of my diagnosis and could support him. They had a pairing scheme at the time, so he went to lunch and one of the lads started talking to him about his nan who had breast cancer a few years ago. Tristan didn’t realise this was a scheme until two years later when the teacher pulled him to one side and asked him to go and find a girl and talk to her about my breast cancer.

I started six cycles of FEC chemotherapy six weeks after the operation. Two days after my first chemotherapy session, my dad had a large stroke. Going to visit Dad in hospital and talking to my family about him served as a distraction from my own diagnosis. I still had dark niggles; will it come back? Will I see Tristan grow up? But I did my best to put them to the back of my mind. Infact my whole memory of that year was redesigning and decorating the house. It was my way of keeping busy and staying positive.

About 2 weeks after my first chemo cycle my son Tristan shaved my head, making it a light-hearted experience by cutting various hairstyles into it as he went. Neither of us could have guessed that seventeen years later, he would do the same for me. After chemotherapy, I had radiotherapy for four weeks. 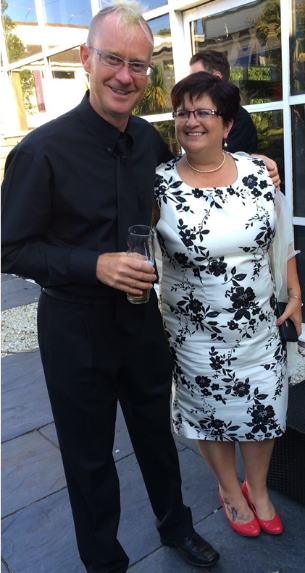 Life returned to normal quite quickly. I went back to work after twelve months off in total and about five months after that I met my now husband, Richie, through a mutual friend. The next seventeen years saw us enjoy music festivals and holidays in our campervan together. My life was complete and fulfilling – I had a wonderful husband, home, family and a job I loved.

When we saw the advert on TV stating 1 in 2 people will be diagnosed in their lifetime, I used to say to him, ‘I’ve taken one for the team, you’ll be alright’. 2019 was not our year though and in January, Richie said there was something amiss.

Thinking his symptoms could be due to the rich food and partying over Christmas, we decided to have a quiet January and see if his symptoms eased. They didn’t, so he went to the doctors who referred him for a colonoscopy. At the same time, I noticed a lump in my left breast which I could only feel when I lay down. When I tried to find the lump, I just felt scar tissue from the reduction I had in 2016 to level myself up after my lumpectomy.

But when Richie was diagnosed with colorectal cancer, I asked if my routine mammogram could be brought forward just to put my mind at rest. I went to the clinic without telling Richie as I was convinced that I was being over cautious.

When the mammogram got to the 8th or 9th slide, I started to think something was wrong. Indeed, there was tissue change so I was referred for an ultrasound the following week. The lady performing the ultrasound said, ‘I’m not a betting woman, but if I was, I’d put my money on it being cancer again.’ I had my 50th birthday party that weekend before going back in to receive the results.

At 28mm, the lump was the exact same size as last time. But the breast cancer was different. It was grade 2, so less aggressive, and ER+ and HER2+. When the oncologist told me, I said I was relieved, and he looked at me strangely. I explained that last time I was triple negative so I couldn’t have anything afterwards and this time I had the safety blanket of ongoing treatment.

My treatment started with chemotherapy this time; a combination of Docetaxel, Carboplatin, Herceptin and Pertuzumab for six cycles.

After the first cycle I contracted sepsis and had to stay in hospital for five days. This happened again after the third cycle which resulted in an eight day stay, so the dose was reduced to 90% on the fourth cycle. Incredibly, after just two cycles the tumour had reduced by 50% and by the end of the sixth cycle, I had a pathological complete response. There was nothing there but a marker and dead cancer cells.

This time, I was assigned a counsellor by the breast care team which meant I could pick up the phone and talk to them if I needed to. I also felt more involved in decisions, whereas back in 2002, I felt like I had been put on a conveyor belt.

Richie and I have been treated so well by the NHS and I personally can see that great strides have been made in the treatment of cancer as well as the patient experience. Research has come on leaps and bounds and these successes are due to the charities that are behind it. 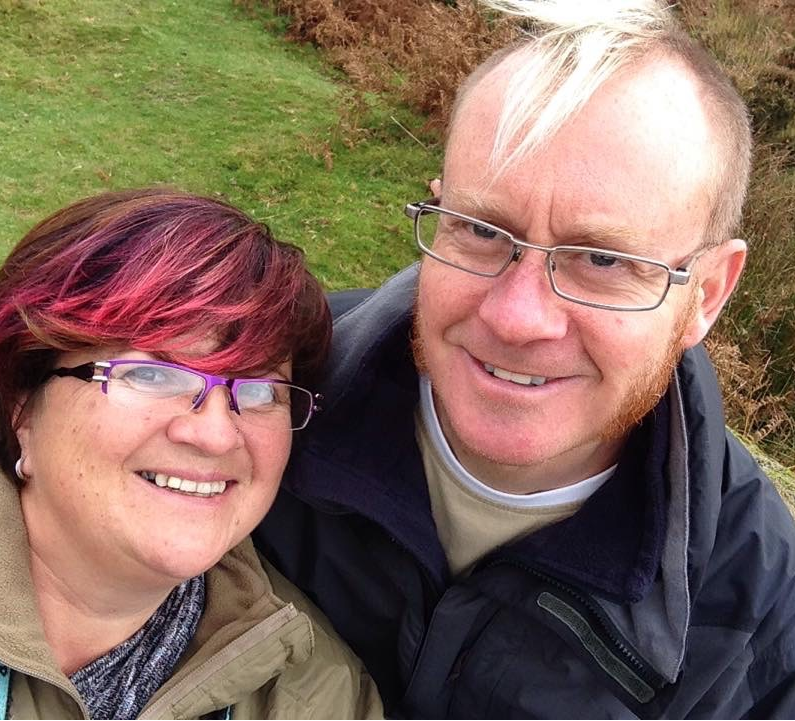 I do have a bit of survivor’s guilt, even more so when we lose someone to cancer. Sometimes I do question whether I get a bit blasé. Yes, I’ve beaten it twice, but it is an evil, horrible, nasty killer and not everyone is as lucky as I have been.

I know it’s not over and I still have to take Tamoxifen for 10 years, but Richie and I consider ourselves lucky that we detected the symptoms in time, and we were diagnosed and treated quickly. We urge everyone to get anything suspicious checked out.