An inspirational teacher, a loving wife and mother, a generous soul with a sharp wit, a thoughtful friend, a lovable northerner and creative person with a passion for literature and a fondness of nature. That was Jane, and this is her story.

Jane was the first in her family to go to university. Upon graduating, she moved to London to embark on her teaching career where she met Martin in January 1999. They were married in 2002 and moved to Warwick to continue their lives together. Five years later they welcomed their daughter into the world.

Just 18 months after the birth of their daughter, Jane found a lump. The very next day she went to her GP who organised a mammogram and biopsy.

A fortnight later Martin accompanied Jane to the hospital to receive her results. They were shown into a small waiting room and asked if they wanted a cup of tea. Jane knew then it must be serious.

Aged just 39, Jane was diagnosed with HER2 positive grade 3 invasive ductal carcinoma. She had a single mastectomy and axillary lymph node clearance a day later.

Rounds of a chemotherapy combination, Epi-CMF and radiotherapy followed, accompanied by the side-effects of the treatment; the hell of chemo, the wigs and the radiation burns to her oesophagus. Jane chose to avoid radiotherapy after her second dose, so treatment continued with 17 cycles of the targeted cancer drug Trastuzumab used specifically to treat HER2 Breast Cancer.

The advice she received was that as her cancer was aggressive and fast growing it was much more likely to respond to treatment, which it did, and she was able to stop treatment in April 2010.

After almost exactly a year in remission, Jane, Martin and their daughter set off for an Easter break in Bournemouth. On the drive down south, Jane received a phone call. They left the motorway by the next slip road and headed to the hospital.

The cancer had metastasised to her liver and bones. The prognosis was devastating, Jane aged just 42 was told it was unlikely that she would see her 50th birthday.

They drove back to Bournemouth with their then six-year old daughter. Martin remembers how difficult it was sitting on the beach and witnessing Jane’s painful realisation that she might never see her daughter reach adolescence.

Radiotherapy was unavoidable this time and commenced in May alongside the chemotherapy drug Paclitaxel, Trastuzumab and Zoledronic acid, which works to slow down the rate of bone change, followed by a three-month cycle of both the chemotherapy drug Capecitabine and targeted therapy drug Lapatinib which finished in December 2012.

Jane often made sense of her disease through literature. Most notable was her ‘Lord of The Rings’ analogy. She was Frodo. Doctors and oncologists were wizard-like, so Gandalf. Martin was her Sam – trying valiantly to carry her and somehow share what she was carrying. She saw herself as a little, ordinary person swept up into a dark and scary world, amid battles not of her own making.

Jane received brilliant support from Breast Cancer Care who provided her with a phone buddy from the beginning and gave good advice about wigs. She also attended two skin and make-up workshops ran by the Look Good Feel Better campaign which did wonders for her psychological wellbeing, making her feel like a woman and not just a patient after the disease had taken away her breast, her hair and ultimately her future was an important ally for her.

The Doctors are the ones battling, she’d say, I’m just getting on with it. Jane never referred to having cancer as a battle, to her it was an inconvenience.

Jane started a clinical trial drug, which was testing a combination of Trastuzumab and Emtansine (TDM-1), in February 2013. TDM-1 was described as a missile that would go straight for the cancer without destroying surrounding healthy cells as the Trastuzumab would attach to the HER2 receptor on the cancer cell and the Emtansine would only become active to kill the cell once inside. A chemotherapy, but apparently without the usual side effects.

Unfortunately, while on the trial Jane experienced gastro-intestinal bleeding and lesions on her face and fingers. These side effects and the evidence that TDM-1 was losing its efficacy informed Jane’s decision to withdraw from the drug and hope that it had kept the cancer at bay, at least for a while.

There were no other treatments available and in her last appointment with the leading Professor, she was advised to go away and have a nice holiday. They went to Gran Canaria over the new year and despite being weak and feeling dizzy, Jane enjoyed a perfect holiday where she spent every day soaking up the sun.

On their return home, the cause of Jane’s dizziness was found to be a brain tumour and she was booked in for an operation in February. The evening before her operation, Jane read Dylan Thomas’ poem ‘Do not go gentle into that good night’.

The operation was initially successful, and Jane woke the next day albeit heavily sedated. Tragically, Jane suffered a cerebral bleed and was placed on life support that night. Martin was called and he and the whole family gathered to say their heart-rending goodbyes. The nurses were incredibly compassionate and even cut a lock of her hair and tied it in a ribbon for Martin. Jane passed away in intensive care on February 18th 2014, just after her 45th birthday.

Through all this, Martin takes comfort in the fact that she did not go gentle, she did burn and rave at close of day. She raged against the dying of the light. 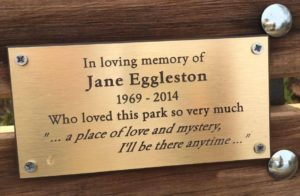 A place for the family to remember Jane

Jane is remembered by a plaque on a bench in her favourite park, a place where Martin and their daughter can go and reflect.

Indeed, Martin remains grateful that the clinical trial extended Jane’s life for 14 months. And this meant so much: another year of seeing her daughter grow. Another holiday. Another 14 months of precious memories.  For this reason, Martin wanted to volunteer for a research charity, but it wasn’t until he saw the Against Breast Cancer offices whilst teaching his daughter to ride her bike on the business park that he decided that the time was right to do so.

Martin now volunteers his time on a regular basis. Breast Cancer research gave Jane an extra 14 months with her family and by giving back Martin hopes to help us to continue our work to increase survival after diagnosis.