When I was eleven, my mum was diagnosed with an advanced stage breast cancer and she lived with it for twenty-one years. I have experienced how breast cancer affects you as a family. My two sisters and I grew up with Cancer.

Now, nearly four years later I am experiencing my own diagnosis.

In this video, Laura describes her hope for better tools to enable earlier detection in young women.

Mum’s diagnosis made me more inclined to check myself and less shy to go to the doctors about symptoms. I’m determined to promote the importance of being breast aware and I use Instagram as a vehicle for this now. By posting about my diagnosis and treatment, a few people have got checked and said they wouldn’t have if they hadn’t seen my post and that’s my point, I got diagnosed as a fit and well thirty-five-year-old first-time mum. I was very quick to go to the doctor who is fully aware of my family history. 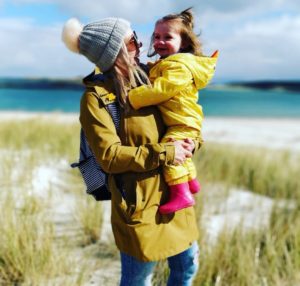 Laura with Orla on holiday

She explained that it could be a number of things, an infection, a blocked milk duct due to breastfeeding. I remember her writing a cover note to the Breast Clinic ‘Laura is a 35-year-old Police officer and first time Mum.’ I burst into tears at this, thinking, ‘this can’t be happening, I’m a Mum.’ Still, it was only two weeks after going to the doctors that I was diagnosed.

When I first felt the lump, I had been playing with my daughter on our bed one Sunday morning, she had leant on my breast and it really hurt. I thought it could be increased sensitivity after breast feeding but I checked and found it; what felt like a pea under my skin, it was hard and prominent. I asked my husband to double check, could he feel the same thing I could? I rang the doctor the next day and got an appointment.

My first appointment at the Churchill quickly snowballed into a mammogram, ultrasound and biopsy. Having your breasts put in a mammogram machine is bizarre, it’s uncomfortable and they manipulate you into weird positions so they can get the best picture of the breast. Even more so for younger women because our breast tissue is far denser. It was weird for me; I’d never had a mammogram before as the screenings aren’t offered earlier than your fiftieth birthday in most cases. I do hope in the future routine screenings are offered for younger women.

It was surreal when they just showed me the lump and said, ‘there it is!’ I started thinking ‘is this lump nothing, or is it trying to kill me?’  The only other ultrasound I had seen before this was when I was pregnant, seeing my daughter’s heartbeat which was a totally joyous experience. Being shown a black mass on screen was a totally different experience, the other end of the scale from joyous!

I had hoped it was a blocked duct. Now my hope was that this mass wasn’t cancerous.

Then came the biopsy. My husband was holding my hand as they injected the local anaesthetic into my nipple. I could hear every click as the core samples were taken. I just laid there, silent tears falling down my face.

The Doctor then said, ‘what have they told you will happen next?’ I replied that I would be told the results in a week. Her face dropped a little and she simply said ‘well, I can tell you it’s NOT nothing’. Suddenly, I’m sat on a hospital bed with a numb breast. Hyperventilating. Topless. Hysterical.

The consultant told me he would have the confirmed diagnosis in a week. He said, ‘go home and try not to worry’. My husband and I walked out of the hospital in silence.

I then had a week of work in my role as police officer; going to domestics, thefts and car accidents and all the time in the back of my mind was ‘I’ve got this lump and I don’t know what it is’.  In a strange way, my work commitments were a welcome distraction.

There was an hour and a half delay when we went back in for the results. The wait was hideous. It was breast cancer. They said its small, contained but its invasive and fast growing. Ductal carcinoma stage 1, bordering on 2. The surgeon said, ‘imagine you are on a motorway. You are in lane 3, that is how fast it is growing.’ My age was going against me in this situation as my body was well and fuelling its growth.

Then you’ve got the mental game of ‘it’s in me, get it out.’ It almost became an obsession in the two weeks before my surgery.

I had the lumpectomy in March which was successful. My surgeon was amazing which made such a difference as it felt like he was treating me as an individual and not just a breast. He was great with my husband too as it affects him as well, not just me. I’m the body, but we are a unit.

Then they scheduled the chemotherapy, but as the treatment could affect my fertility, we chose to have preventative IVF prior to this. We have a daughter but ultimately, we were hoping to try for our second child this year. The drugs, the money and the stress. It was very emotional. It’s all just another part of cancer that doesn’t immediately spring to mind. There are so many women that don’t even get that option, they are told that it is just not possible, that they need to be treated straightaway and the risk would be too high if they postponed treatment for IVF. So I do feel so lucky that we had that option.

I’m having six rounds of FEC-T chemotherapy, four weeks of daily radiotherapy and then hormone therapy. We can’t try for a baby whilst on the hormone treatment, although I may be able to have a break in it, but these possibilities haven’t been discussed in depth yet.

The side effects are nasty. My body literally feels broken. Mouth ulcers. Fuzzy mouth. Headaches. Rapid heartbeat. The severe back pain from Filgrastim injections. Not having the strength to play with my daughter.

I never want anyone to know how it feels. Going on Instagram and highlighting the highs and lows of my life now to raise awareness is one thing, but I don’t want anyone to have the personal experience.

I am going to have acupuncture as someone recommended that it is good to tackle the chemotherapy induced insomnia. I also get night sweats from the drugs I’m on and that’s when I’m on my phone early in the morning, either googling breast cancer or just buying random things. Either can be dangerous. 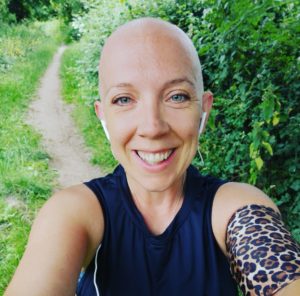 I went for a 4-mile run and did the food shop the other day on my own because I could. I cooked dinner and had a glass of wine with my husband because I could. But then there are days when I’m bloated, I’m bald, everything aches, and I look like I have cancer. There are days that I can’t stomach any food. The contrast is so bizarre. People can see me feeling okay, but I want people to know that it is not always like that and that’s okay too.

There’s no point trying to challenge the chemo. I’m learning to say ‘yes please’ to offers of help and support.

I’m signed off work and they have been amazing, just telling me to return when I’m ready.

So much of the desire not to be a cancer patient I have drawn from my mum. She lived with it for twenty-one years. At one point she was only given a year to live, she refused to accept that, refused to be a statistic, and lived for another thirteen years. She had Herceptin for about five of those years and responded well to that, in fact it was her wonder drug. I’m so inspired by her, and this experience makes me think of her more than ever. I wish she was here, but the fact is, she doesn’t know I’ve got breast cancer, and I’m glad she doesn’t. That is the only positive to her not being here.

So much has changed since I was at the hospital with Mum for her treatments. While more people are being diagnosed, more people are surviving, and I hope to be one of those people.

Treatments are improving all the time thanks to research. When discussing the best treatment plan for me, my details were put into a computer and the consultant showed me my prognosis with treatment or without. The results were overwhelming, and it was a clear choice to go ahead with the treatment plan of chemo and radiotherapy. I don’t even want to imagine what would happen if I chose not to have it.

I am at a primary stage and I’m lucky that I found it and caught it in time. If I had delayed going to the doctor, the rate at which it was growing, it could even have spread before diagnosis. It really can be the difference between survival or not. I am literally a walking ambassador of early detection, getting anything suspicious checked and starting treatment as soon as possible. That’s why I hope effective routine screenings are developed for younger women.

I don’t know how far we are away from finding a cure for cancer, but I hope that if it’s not in my lifetime, that it’s in my daughter’s.