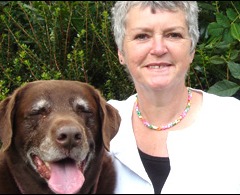 Liz Buckingham was the 2000th breast cancer patient enrolled on our Diet and Lifestyle Study in summer 2008 making her a very special lady indeed. Liz discovered she had Type 1 or low grade breast cancer in 2007 after a routine mammogram so the news came as a bolt from the blue.

“The discovery that I had a breast cancer tumour was devastating as there were no outward signs that I had the disease. I would urge every woman to ensure they attend routine screenings as I did from the age of 50. The wheels went into motion very quickly and I had a repeat mammogram and a biopsy followed by a mastectomy on my right breast a fortnight later. Afterwards I was shocked to discover that the cancer had spread to my lymph nodes and although I was extremely upset, the news helped prepare me for my next appointment with my surgeon.

Liz has received the most incredible support from her close family, including daughter Casey and her neighbour Mary. Her chemotherapy nurse, Amanda Degabriele from Ninewells Hospital in Dundee, has also given unstinting support. She cared for Liz during her treatment at the chemotherapy unit and checked on her at home too.

Radiotherapy followed chemotherapy and Liz is now on breast cancer drug Arimidex. Its side effects can make her feel tired and her joints often ache but humour and friendship have helped her through. She refused to wear a wig when she lost her hair but luckily has a knack of wearing hats with style. She also opted for an alternative prosthesis that was more ‘her’ and maintains that these things are important in holding onto your dignity and staying in control when your health is in the hands of others.

Amanda invited Liz to join the Diet & Lifestyle Study which she did without hesitation as she feels her information could help future sufferers overcome the disease. She donates a blood and urine sample annually and completes information about her diet and lifestyle which is added to the growing bank of data studied by Against Breast Cancer researchers at University College London.

Recently Liz had a routine mammogram on her left breast and is relieved to have been given the all clear. The option for reconstructive surgery is open but Liz isn’t ready just yet. She’s always been healthy, is a vegetarian and says: “The disease has made me a stronger person and these days I don’t let the little things in life worry me anymore. People’s kindness has buoyed me through some tough times and even my pet dog Hugo and cat Damian have proved to be great supporters! I’m feeling very positive for the future and am really looking forward to going back to work in early August when I’ll be able to catch up on all the gossip with my colleagues!”