Mark and Tina met on a blind date arranged by Mark’s brother who knew of their mutual love of motorbikes. Six months later, Tina had passed her motorbike test and the couple enjoyed riding out on their motorbikes together. Mark and Tina were married on the 1st July 1995 in Stubbington, Fareham. Mark and his best man wore their army uniforms and Tina, a trained and talented tailor, handcrafted her own wedding dress.

In 1996, Mark was posted to Germany with the army and so they moved overseas. They had wanted to start a family but sadly this proved difficult for them. Sometime after, Mark was posted to Belgium and it was here that the couple saw a specialist in Brussels who placed Tina on fertility treatment. The couple conceived.

During the later stages of her pregnancy, Tina discovered a lump in her breast. The midwives reassured her that lumps were commonplace during pregnancy and were most likely benign. Tina gave birth to their eldest daughter, Alice, in July 1999.

Only three days after giving birth to Alice, Tina had an X-ray and biopsy. Cancerous cells were found. Alice was just one week old when Tina then underwent surgery to remove her right breast and ten lymph nodes in her chest and right arm. Tina was just thirty-one years old.

The decision to move back to Portsmouth was made so Tina could be closer to her family. Tina continued treatment back in England and underwent reconstructive surgery.

Three years later, Tina was in remission, but due to the chemotherapy treatment she had experienced medical menopause. And so, it came with great surprise when in January 2005, Tina became pregnant. Georgina was born in September, 2005.

In March 2006 when Georgina was just six months old, Tina went for her annual checkup. They found that Tina had secondary spread to her liver and bones. Surgery was not an option and so Tina underwent chemotherapy once more and the tumours reduced in size significantly, but were not eradicated. Towards the end of 2006, Tina started to receive Herceptin.

The tumours, which had been reduced to a size comparable to grains of sand, had started to increase in size again. Tina consented to receiving a trial drug in conjunction with Herceptin. The combination of drugs seemed to have a positive effect on the size of the tumours although with it came debilitating side effects. Tina experienced headaches, painful mouth ulcers and heavy nosebleeds.

The side effects Tina experienced continued to worsen and Mark would often have to call an ambulance, resulting in Tina being hospitalised for days at a time.

One Sunday morning in June 2015, Tina woke up with a terrible headache. Headaches were not unusual for Tina, but this headache could not be alleviated by pain medication. Mark called an ambulance and Tina was taken to the Queen Alexandra Hospital in Cosham. CT scans revealed that Tina had suffered a cerebral bleed and she was transferred to Southampton Hospital for an emergency operation. Despite all efforts, sadly Tina suffered fatal brain damage overnight and passed away.

At just forty-seven years of age, this marked the tragic and abrupt end to Tina’s sixteen-year fight against breast cancer.

In 2016, Mark turned fifty and in memory of Tina, organised fifty challenges to complete in that year. He wanted the challenges to be related to Tina’s journey and to be bizarre enough to grab people’s attention in order to raise awareness around the secondary spread of breast cancer.

Tina used to explain cancer as being a guest in our house – cancer lived with us, we weren’t living with cancer.

It was a family tradition to walk down the beach on New Year’s Day. This set the scene for Mark’s first challenge; Mark, his two daughters and their dog walked down to the beach but this time when they got there, he handed over his phone and proceeded to swim in the freezing cold sea wearing a minion costume! Mark’s second challenge involved having his nipple pierced. He had the procedure filmed and uploaded onto his Facebook page. He wanted to do this to acknowledge the physical pain that Tina had experienced throughout her journey. Mark learned that one of his colleagues had shown the video to his wife who instantly went to check her breasts. 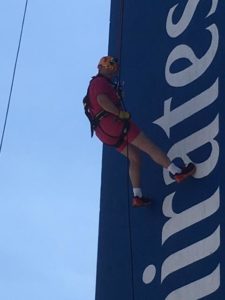 Another of Mark’s challenges was to ice skate in a mankini. People sponsored him not to do anything like that again! Mark and Tina used to explain cancer as being a guest in their house – cancer lived with them, they weren’t living with cancer. This attitude meant that they always had to balance enjoying life and dealing with cancer. This tricky balancing act, they described as skating on thin ice.

Mark also abseiled down Spinnaker tower on Tina’s birthday in 2016 and drove a double decker bus for another of his challenges; the same mode of transport that took Tina to the church for their wedding and then transported their guests to the reception.

In total, Mark’s 50 in 50 challenges generated over £1,250 in memory of Tina and served to raise a great deal of awareness in their community and beyond into the secondary spread of breast cancer.