Due to COVID restrictions and the aggressive nature of her breast cancer, Angela’s family were given no time to say goodbye

It was half-term October 2019 and Angela had set off to Italy with GCSE and A level students from the school where she had worked since 2000. She had an excellent week. On the day after she returned she mentioned to her husband Jason that she thought the suitcase was heavy and she may have hurt her shoulder due to pulling it through the airport.

This was a first possible sign of things to come but she decided to wait and see if it improved. It didn’t. After a week or so she visited her GP and despite an examination nothing was suspected, so she waited more to see if it improved.

After another fortnight a further GP appointment was arranged and this time a physio follow up session was arranged. Nothing sinister was suspected despite Angela mentioning her concerns. The physio session happened but was no help. 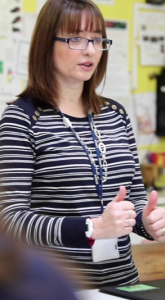 Angela in her teaching job

Christmas came and went and the New Year gave her a date for a mammogram at the hospital in early February. By that time her right arm was swelling and showing signs of fluid retention (Lymphoedema) where the lymph nodes were not working properly and causing pain as well as swelling.

The consultant at the clinic within the hospital was able to sadly confirm it was breast cancer after a brief inspection. It was evident across her right breast with skin discolouration and tenderness. She had stage 3 breast cancer and a treatment plan was discussed a week later once additional biopsies and scans were taken. Her husband Jason remembers the look on the consultants face suggested this wasn’t going to be an easy process for her.

She was in a healthy place otherwise, which allowed her to cope extremely well with the chemotherapy. She even went for a Parkrun after the first two sessions which was the day after chemo. Everyone was staggered and amazed how she did it.

“She remained so positive throughout and I can only recall her crying on a handful of occasions which was remarkable in the circumstances as myself and others were struggling to hold back our emotions.”

Then came lockdown and more stress points, and in April she was told there were signs the cancer had spread and so further scans were needed. She had so many injections and uncomfortable scans where she was required to be stationary for a long period of time whilst noisy machine attempted to build up images of what was happening inside of her body. Staff at all of the hospitals were so kind and thoughtful and would always help her get through it.

By mid-May she were told the awful news that the cancer had indeed spread and become secondary cancer. Her consultant said that it was ‘life limiting’. This was the worst news – her battle would remain but there was only going to be one winner. Neither Angela nor Jason dared push for a time frame.

Her treatment plan was still going on and the six scheduled doses of chemotherapy had finished early June. A scan and blood test confirmed that she had almost won that particular battle. The chemo had done its initial job and suppressed the breast cancer and a doctor dared to use the words ‘in remission’ which wasn’t completely true as it had of course spread. She asked “what happens now?” Their reply was surprising. “We wait.”

“I intervened ‘we wait for what, the cancer to return? Can we not keep on giving her medication?’ There was no reply.”

How long before it returns Angela asked reluctantly? 2-12 months was the reply and it turned out the shorter time frame. 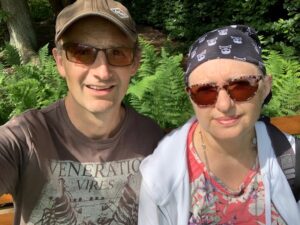 Jason and Angela in Scotland, one month before she passed away.

Further worries followed but she enjoyed a relatively stable next six weeks as her body dared to show recovery signs from the chemo. Her hair started to grow back slowly and the children maybe dreamed she was getting better. They managed a two-week escape to Scotland at the start of the summer holidays with friends – it did not feel like the final holiday that it turned out to be.

Within a week of returning from the holiday at the beginning of August further complications came. She experienced an awful five-day migraine which ended up being diagnosed as the cancer spreading to the brain. She missed her son’s birthday and visits to close family and friends as she was struggling with the disease. She was told not to drive which was a fatal blow to her independence but she remained so positive and came up with alternatives.

Realistically by now her dream of returning to work to teach had gone. Her work colleagues had organised a (socially-distanced) picnic at the local park. She was using her phone, her main lifeline of communication, to organise this event. The original date was cancelled as she wasn’t feeling very well but a new date of 13 September was rescheduled. This didn’t happen.

Her final week was very hard as everyone could see her struggling. Both the children and her husband went to school as planned for the last week and despite having a pre-chemotherapy round two check on the Wednesday of that week she was given an all-clear to have treatment. However, she was in pain and managing the pain across her abdomen, lower back and across her breasts and head.

Her immediate outlook was to try and simply survive. She became more reliant on the drugs, and they didn’t seem to be helping her. On the Thursday Jason could see the look in her eyes that suggested they were losing her. Getting up every 2-3 hours to take medication before returning to her bed in need of rest and sleep was a repeating pattern.

On the Friday her oxygen levels were lower than they should be. She was checked at the hospital and instead of chemo, a decision was taken to send her via an ambulance to A&E. Due to COVID restrictions, Jason was unable to accompany her. As he said goodbye to her with a reassuring hug, he didn’t realise this was the last time he would ever see her.

“There was no goodbye and she passed away on the Sunday around 11am. We were not given sufficient time to get to her and express our love for her. It was very traumatic for myself and our children Jake and Georgia. We were all extremely saddened and in shock.”

She had died on 13 September, barely seven months later after being diagnosed. She had suffered due to the aggressive nature of the cancer despite the chemotherapy and other treatments. 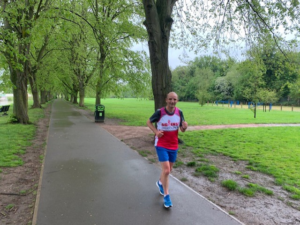 Jason training for his marathon

Her physical health and mental health suffered as she battled the disease. Her once happy and content world had imploded. 12 months earlier she had been on a school trip to Italy and thoroughly enjoying the experience. Now she was gone. Angela was just 49 years old.

Jason was determined to do something positive in her honour and will be running the 2021 Virgin Money London Marathon for Against Breast Cancer. He hopes to do Angela proud.

Her family wanted to share her story to help people comprehend their own experiences of living with cancer and encourage others to keep checking themselves – breast cancer has not gone away because of the pandemic.