The rock and foundation of our family and the glue that holds us all together is probably the best way to describe my mum. My brother and I both moved away from home after finishing our university degrees, but weekends were always spent visiting Mum and Dad; quite often through activities that Mum would have planned in the week. We all looked forward to the weekend and being together as a family.

In January 2013 Mum turned 50 and was called for her first mammogram. It never crossed our minds that Mum would hear anything further from it, however, two days later Mum received a letter asking her to return to the hospital. In typical Mum style she didn’t tell us she had been called back and went to her appointment on her own. They had found a small lump. A biopsy was carried out and Mum was told that it was just an innocent, fatty lump.

In January 2016 Mum went for her next routine mammogram. Again, a few days later Mum received a letter asking her to return to the hospital. She only told Dad this time as she was convinced it would just be another innocent lump and therefore no need to worry us.

However, that night our lives crashed around us when Mum and Dad told us that Mum had been diagnosed with grade two breast cancer.

Mum and I had participated in the Race for Life for the past four years but never had we dreamed that one day we would be directly affected. As a family we had no experience of cancer; we naively thought it was something that happened to other families, not us.

That night we all had so many questions but one question that never crossed anyone’s mind was ‘what if they didn’t know how to treat Mum’s cancer?’ As a family we focused on the practical things; who was going to take Mum to hospital? Who was going to watch the dog?

I will never forget Mum’s positive and upbeat attitude. As I cried, Mum was telling us how lucky she was. We couldn’t understand how she could feel lucky, she had just been told she had breast cancer. Mum had found the positives; she didn’t need chemotherapy or a mastectomy.

A week later Mum went in for a lumpectomy and a few months later started radiotherapy. Having always loved scarves and knowing she would need 15 sessions of radiotherapy she counted out 15 scarves on the bed. In the beginning they were plain and dark in colour, gradually getting brighter as she got closer to her final session, with the final scarf resembling a rainbow.

Watching Mum go through radiotherapy was tough to see and as a family we struggled to understand that treatment that was making Mum better was also making her look and feel so poorly, especially as she seemed so well before the diagnosis. After each radiotherapy session, we had to walk down one corridor to the car park. For us it was easy, but for Mum it felt like walking a marathon and she would be asleep in the car before we had even pulled out of our parking space. 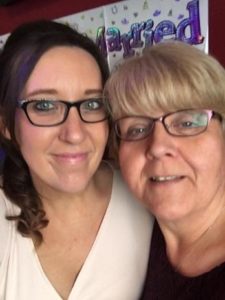 One year on from diagnosis

A few months later we were given the news that Mum was cancer free. We are now two years on and whilst Mum is doing well, I think as a family it never leaves you. We all feel the nerves when January comes and it’s time for Mum’s mammogram; our lives remain on hold for those few days whilst we wait for the results to arrive.

It has also changed our lives for the better though as we now appreciate every day and, just like Mum showed us, we all look for the positives in every situation.

As a family we will be forever grateful to the amazing charities that supported us. In particular Against Breast Cancer; because of amazing research like theirs we never had to question whether the hospital knew how to treat Mum.

I ran the 2018 London Marathon for Against Breast Cancer and it was a day that was filled with so many emotions, but when I put on my running vest I just felt so proud that I was able to give something back.

After having my little boy only 8 months before the marathon I knew I was never going to be one of the first to finish but I was determined I was going to cross that finish line. At one point in the marathon, faced with the heat, I wondered if I could carry on, but I thought those faced with breast cancer can’t have a day off fighting because it’s hot or because it hurts. This gave me the drive I needed to fight to that finish line.

Mum’s diagnosis has changed my outlook on life and I know how lucky we are that my little boy can grow up with his amazing Nana in his life, it has also made me determined to continue to raise awareness of Breast Cancer. I had never checked my own breasts until Mum was diagnosed as I didn’t think it would ever happen to us, I am sure I am not the only one with this attitude, an attitude that I would love to see change with all women regularly checking their breasts.