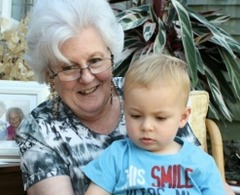 Sylvia Moon lives in Kent with her husband. She has 3 grown up children.

Four years ago at the age of 68, Sylvia went for her final routine mammogram – this tri-annual service finishes at age 70 – and a lump was detected deep inside her left breast, too deep to have been found by her own regular examination.

Thankfully it was only 19cm across so Sylvia was able to avoid a full mastectomy.

Within a month, Sylvia was taken into hospital for a lumpectomy which removed about 1/3 of her breast, but no lymph nodes were affected. The 4 weeks of radiotherapy that followed left her very tired and slightly sore but she knows that a later diagnosis would have resulted in more serious surgery and probably chemotherapy which she managed to avoid, thanks to the early diagnosis.

Sylvia made a point of telling all her friends and family about her diagnosis – she wants to encourage all women to check their breasts and go for their routine mammograms when called.

I give a regular amount each month, it’s an affordable way for me to give and it helps the charity to plan their research with greater confidence.

Not enough is known about all the triggers for breast cancer but Sylvia does remember that many years ago she suffered an injury to that breast when a ladder fell on her. She was also in HRT for 10 years, a known risk factor in breast cancer. A number of members of Syliva’s family have had other cancers so when they heard her diagnosis, they knew roughly what to expect.

She is now on a maintenance dose of Letrozole (Femara), a hormonal therapy that works by interfering with the production of particular hormones in the body. The only side effect she notices is that because the hormone she is taking is a male hormone, she has to shave her chin regularly; a small price to pay for being given her life back. Sylvia expects to be signed off by her doctor next year.

She has opted for a 1/3 prosthesis which makes wearing certain clothes easier and is delighted that she now feels ‘back to normal’ after her treatment.