Despite thinking she was ‘not built for running’ seven years after her diagnosis in 2012, Victoria took on the London Marathon to raise funds for Against Breast Cancer.

Unlike her two older children, she had struggled to breastfeed her youngest son and after three months she had to stop, passing it off as milk blockages or mastitis. She carried on with life. After all, she felt fine.

But after putting her children to bed one night, she became aware of the lump. It was solid, thick and spanned from one side of her right breast to the other.

Soon after, Victoria was diagnosed with stage 3 hormone receptive breast cancer, the tumour measured 5.4cm and had spread to four of her lymph nodes. Victoria was just thirty-six years old.

Upon leaving the hospital with the news of her diagnosis she broke down and cried. This was to be the only time she cried. After that I said to myself, rather than why me, why not me?

Victoria’s top priority was to ‘get rid of it’. She wanted to survive. Her Macmillan nurse understood Victoria’s eagerness to just get the mastectomy over and done with but urged her to consider the longer-term consequences of not having reconstruction surgery, advising her that down the line she might care about her appearance. Victoria did take a step back to consider the options and she is glad she did. 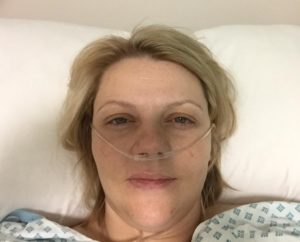 I felt my kids were too young for me to die. My kids needed me

She opted to have a dorsi flap reconstruction in the same operation as her single mastectomy and full lymph node clearance. This added an extra six hours to her operation but meant that the surgeon could obtain a better result and produce less scarring.

Recovery from this operation was painful. Victoria slept sitting up in her chair and experienced weakness and a loss of mobility in her right arm. She had four drains fitted and one of these were taken out early as there seemed to be no fluid draining from that particular site. I had a Tesco bag with bottles in for the drains and I was walking around at home with this set up for about a week.

However seroma, a common problem after this operation, where fluid builds up under the scar on the back occurred. This presented as chronic when Victoria went into the bathroom one day and lymph fluid exploded through her stitches. A frightening experience, she screamed for her Mum who called the clinic. Victoria was reassured that although a disturbing experience, it was not immediately dangerous but she would have to make regular visits to the hospital to have this fluid manually drained. It was really bad. The last thing you want after everything you’ve been through is to go back to hospital for yet another needle.

Despite a difficult recovery, Victoria is grateful for all the treatment that she had. Her consultant Oncoplastic Breast Surgeon, Mr Munot, was very precise and after the main operation she had several minor corrective surgeries to ensure symmetry and to minimise the scarring from the seroma.

Victoria is happy with the results, undeterred by the after effects. She still can’t lift her right arm above her head when laid down, and she describes the relocated muscle as feeling like there’s a big piece of elastic across her chest. When exercising, it can even feel like there’s a basketball under her arm. But these are minor things, after all I’m alive!

During the chemotherapy she used a cold cap to prevent hair loss. Although her hair did thin, cutting her hair short meant that no one could really tell she was going through treatment.

She experienced nausea and tiredness as side effects of the chemotherapy and gained weight due to the increased appetite caused by the steroids she took alongside the chemotherapy. Despite this, she felt very blessed that her body was able to handle it and she could get out the other side. Soon followed fifteen sessions of radiotherapy over three weeks. Victoria attended a work-related training course during treatment and remembers feeling ill during this time, although likened it to morning sickness and at least this time she could take medication to ease her symptoms.

Having the same nurse for most of her chemotherapy sessions allowed them to develop a good relationship. They would sit and talk about anything and everything and this suited Victoria’s way of coping. She didn’t want to become a victim. It wasn’t that she was in denial, she just knew that she had cancer and she was dealing with it. As a leadership coach, Victoria regularly coached her chemotherapy nurse who said that she was a real source of inspiration for her.

Victoria then started a ten-year course of Tamoxifen. At that time, a five-year course was standard, but recent research findings have suggested that taking it for double this time could improve outcomes and significantly reduce risk of recurrence of oestrogen receptive breast cancers. For the first six months of treatment she experienced hot flushes and her periods were interrupted but these side-effects have since eased.

In December 2017, Victoria was discharged from the Hospital’s care. It was a great feeling, but also unsettling for her. She sees taking Tamoxifen as being like an insurance policy and she is glad that she has another three years on the drug. The yearly mammograms give her a sense of being monitored although she carries the worry that the mammogram would not show any changes in the right breast as this is not scanned as part of the mammogram procedure.

Just as Victoria finished her own treatment, her Dad was diagnosed with prostate cancer. After discussing their family history of three generations with both breast and prostate cancer his Consultant Oncologist referred him to the NHS Department of Clinical Genetics to be tested for the BRCA gene mutation, linked to both prostate cancer in men and breast cancer in women. To the family’s relief, no mutations were found in BRCA 1-2 genes, however the department did mention that genetic testing is still very young, and they could not guarantee fully that there was no family connection.

Victoria made sure her children were involved in her treatment journey and they even went to some of her chemotherapy.

‘I explained it differently to my eleven-year-old son than I did to my four-year-old daughter, but they came through the experience with me’.

Heartwarmingly, Victoria’s daughter would encourage her by saying ‘You’ve got to keep going Mum. Never give up. Be strong’

The whole experience gave Victoria a chance to re-balance her life. She now commits to having ‘me time’ and has joined a community choir to fulfil her love of singing. She also committed to losing the weight she gained through treatment. Alongside her supportive husband David, she started by running just 200 metres to the local store and back, then further on to the supermarket and so on. 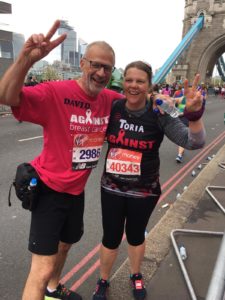 Then one day, David returned home from work and told Victoria that he had entered them both into the London marathon! Much to Victoria’s amusement, David got a place and she didn’t. But a few days later a pop-up appeared on her phone advertising London marathon charity places. She clicked it, chose Against Breast Cancer and filled in her application form. As a person of faith, I thought if God thinks I’m capable of doing this marathon I will get a place’. She was so elated at first, as a marathon had been on her list of life goals, but then the reality kicked in which was quite scary!

Her children have been active in helping with the fundraising. An impressive example of this was when they and a friend made lemon juice and went to the neighbours asking if they would like to make a donation. Touched by their efforts and how they described their mum as a survivor who was now running a marathon for a breast cancer charity, they dug deep, raising £82! 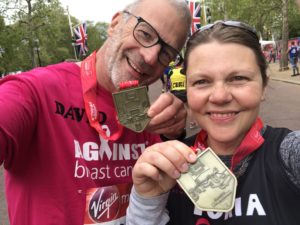 Victoria found the London Marathon experience amazing and quite emotional. Whilst on the way to the start zone, she had several flashbacks to her walk to the operating room for her major surgery and remembered mentally going through her list of things still to do in her life, of which the London Marathon was one of them.  The reality really hit in that she had achieved a level of fitness to do it. The atmosphere of jogging with over 40,000 other people all with their own stories and causes was spectacular and the drive of the crowd that encouraged the runners to keep going was out of this world.

‘As the finish line approached the reality set in that we’ve done this, like the cancer journey we have fought it and we have survived!’

Victoria remains grateful for the outstanding support she received from her parents, her husband and her children, and the assistance from the Macmillan nurses, medical experts and staff who supported her not only physically but emotionally.