10,000 bras down, but ‘bra lady’ Helen has no intention of stopping

One of our fantastic supporters, Helen Moye, is celebrating reaching the landmark of 10,000 bras collected in her local area over the past six years, and she has no intention of stopping there.

12 years ago, Helen’s friend Ann died of breast cancer and since then she has always supported cancer charities.

About six years ago, when Helen was a college lecturer at West Suffolk College in Bury St Edmunds, she started collecting bras for our bra recycling scheme. Helen strongly felt that her students should all participate in a charity event to broaden their perspective on what it is to be human, female and vulnerable to illness. She believed that a breast cancer charity was the obvious choice, both in memory of her friend Ann and because her beauty therapy students were all female. 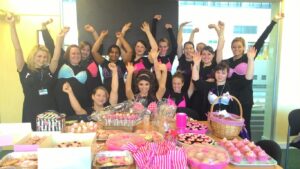 “All of the students wore a bra on the outside of their beauty uniforms and went round the college collecting all the unwanted bras from staff and students,” Helen explained. “As they had advertised around the college in the weeks before this event, the students collected a huge amount of bras. They also held an small event where they made and sold ‘boob’ cakes and also raised money which was donated to Against Breast Cancer.”

Helen said that the whole event was such a success, it made her think how there must be hundreds of bras languishing in ladies’ top drawers that were uncomfortable, the wrong size, old, over-washed and that’s without the ones where the wire has poked through the fabric during the day! Helen said that she was sure she wasn’t the only lady who had their two or three favourite and most comfortable bras that she wore all the time which sat on top of a pile of others that she very rarely wore.

As she started her journey with bra recycling, Helen had a bra bank installed at work, then in her local M&S and Debenhams. Her bra bank empire was growing! Whenever Helen got close to her next 1,000 bras, she would text all her friends to drop in a few more. She would often return home from work to find carrier bags hanging on her door handle filled with unwanted bras.

Helen has now become known as ‘The Bra Lady of Bury St Edmunds’ having been interviewed by the local newspaper, radio and TV coverage. To date, Helen has collected and sent for recycling with Against Breast Cancer just over 10,000 bras! 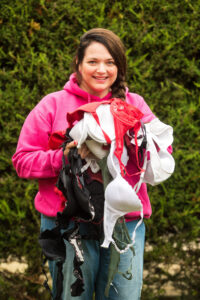 Helen said that she intends to carry on collecting unwanted bras because the project works on so many different levels: money is raised to fund research into secondary breast cancer and finding a vaccine; women in the developing world are given access to bras which they could not otherwise afford; jobs are created in the UK and in developing countries and nothing goes into landfill. Plus, as Helen was brought up in a family of ‘recyclers’, this ticks another box for her.

Helen says that the positivity of being a volunteer bra recycler with Against Breast Cancer is immeasurable and she really does feel that she is spreading happiness with everyone she comes into contact with.

During her time collecting the bras, Helen has been told some heart breaking stories of loss from the kind supporters who have donated their bras. Some of the bra donors have experienced breast cancer themselves, many have friends and family who have and there have been some very special widowers who have lost their wives to this cruel disease, but have said they feel comforted to know that some good can come from such a sad event by donating some of their love-ones possessions.

So when we asked Helen why she carries on, her response was: “Why wouldn’t I? there is no downside other than storing hundreds of bras in our garage, losing count at 899 and having to start the count again from 1 and finding a gigantic spider who decided to seek shelter in one of the unsealed boxes!

This is a passion that brings hope for a cure for breast cancer and I can’t think of any reason better to collect the next 10,000 bras!”

Helen spoke to the BBC recently about her success – you can watch the video here.