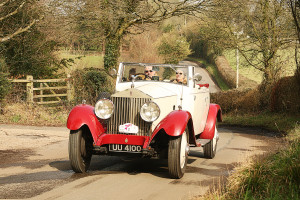 Thank you to everyone who took part in the 19th Regis Classic Tour ‘BOB’ Tour visiting Berkshire, Oxfordshire & Buckinghamshire this year.

63 classic cars and their crews left Hilton-St Anne’s Manor at Wokingham on Saturday morning heading out on a picturesque journey through the Chiltern Hills that included Nether Winchendon House and the famous Kop Hill. The Trenchard Museum and The James McCudden Flight Heritage Centre at RAF Halton provided lunch and a chance to meet rallying Legend Paddy Hopkirk MBE.

Saturday’s Black Tie Gala Dinner was followed by Rob Hunt, the Honorary Auctioneer famed for making great efforts to extract as much as possible from the guests to help the fundraising.

Sunday’s route through Berkshire into Oxfordshire concluded at The Williams Conference Centre at Grove, and a chance to view Sir Frank Williams private collection of Grand Prix cars.

2017 will be last Regis Classic Tour, returning to where it all began in 1997, Rotterdam.

Events such as this take a huge amount of planning and special thanks must go to Chris Millward and his RAC Breakdown Team and to William Frosts of Frosts Ltd for sponsoring the event once again.

The ladies of the Bognor Regis Motor Club were able to announce this year that they exceeded their fundraising target of Half a Million Pounds from the 19 years of Regis Classic Tours which has been split equally between Against Breast Cancer and Orchid – Fighting Male Cancer.