Beverley Nicholas was the inspiration, founder and main organiser of the Batley Bulldogs fundraising, she sadly passed away due to secondary spread breast cancer in May 2019.

Beverley began a fundraising initiative in 2014 named “The Pink Weekend”. Since then she’d organised sponsored walks, player calendars, family fun days, afternoon tea and of course the infamous Ducking Stool! The team have played one game each of the five seasons in a specially designed Pink Kit which has then been auctioned to raise further monies.

Many of the team loved to join in and help with raising funds, one gentleman in particular was Michael.

Michael joined the Batley Bulldogs Rugby League Club just over 2 years ago. He and his family were made to feel incredibly welcome by the players, staff and supporters the second they walked through the door. The sense of family and community within the club were second to none.

Sadly Beverley, had been diagnosed with breast cancer for a second time, and after her passing, although Michael had only known her a relatively short time, she made an immediate impression on him and his family. It was blindingly obvious that she was an incredible woman. She has left a giant hole in the hearts of her family, and the club.

Michael believed the most fitting way for him to remember this remarkable woman was to contribute to the Pink Weekend. He wanted to do something significant to raise as much money as possible and, as he had been growing his hair for almost 3 years, he decided to do a sponsored head shave with all donations to go to Against Breast Cancer, who Beverley was so truly proud to support for many years. Michael raised an astonishing £4195! More than he ever imagined. 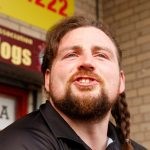 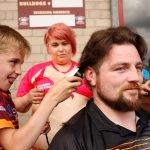 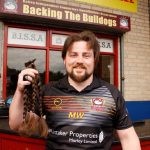 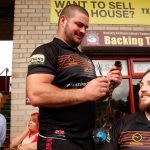 The Batley Bulldogs have also raised funds by doing many pink themed challenges, including their Valentine’s ball and pink match.

Kevin, Beverley’s husband and Alexandra, Beverley’s daughter believe Beverley would be so proud that they continue to support and raise vital funds for Against Breast Cancer’s research and will continue to do so for many years to come.