Bradley Lowery is a five year old boy who’s been fighting neuroblastoma for more than half of his short life. You may have read his story, heard about him on the radio or maybe even seen him on television leading out the England football team hand in hand with his hero, Sunderland striker Jermaine Dafoe.

Neuroblastoma affects just under 100 children a year in the UK and has one of the lowest survival rates of all childhood cancers. Bradley’s family had hoped to take him to America to undergo pioneering treatment. But despite raising the colossal amount of money required, they learned in early 2017 that his cancer diagnosis had become terminal.

Bradley is currently undergoing treatment at Newcastle’s Royal Victoria Infirmary rather than having to travel to America. His friends and family continue to support him and any money raised which does not go towards Bradley’s treatment will be put into the Bradley Lowery Foundation, to support others going through the same ordeal. 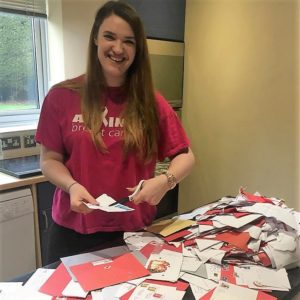 Just a few of Bradley’s stamps

We became aware of Bradley’s story last Christmas when, after his supporters put out a public appeal for Christmas cards which resulted in an extraordinary display of love and kindness.

Bradley’s supporters approached us about recycling the stamps they had received and we were only too pleased to help, however we were taken aback somewhat when they announced Bradley had a team of volunteers in place opening over 200,000 Christmas cards!

We were delighted to have been involved in such a fantastic campaign, Bradley, we understand, was delighted to hear the stamps were supporting other charities and we’d like to thank him, Martin Gibson for contacting us to arrange and Steve Grayley of RS Solutions for transporting such a large quantity of stamps which generated £600 towards our research into secondary breast cancer.

As a final thank you and with his family’s permission, we have named one of the awards at our annual Against Breast Cancer Achievement Awards the Bradley Lowery Courage Award and we wish this extraordinary young man all the luck in the world.