Celebrating the youngest and slowest fundraisers around 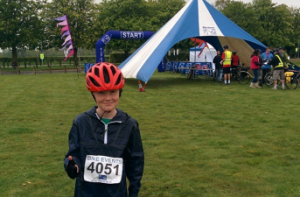 Thumbs up from William

To paraphrase a popular Broadway song “it’s not where you finish, it’s where you start” or to put it more accurately, that you actually started in the first place.

A fact recently epitomised by two fantastic supporters each taking part in very different but equally challenging events, and each inspired to get involved by their own grandmothers successful treatment for breast cancer.

William, aged 11 was the youngest rider to take part in our Classic Oxfordshire Gr8 Escape family bike ride. Partnered by his dad Hedley, also a keen cyclist, William was looking for a challenge and felt the 12 mile route would be perfect.

Despite awful weather conditions and the route being further than he had ever attempted to ride before, William safely accomplished his goal. He rode and fundraised in support of his Grandmother Joan, and to celebrate her being free from breast cancer for 7 years. When we asked William  how he felt afterwards, he said “I enjoyed the ride very much as it had different surfaces which made it interesting.” 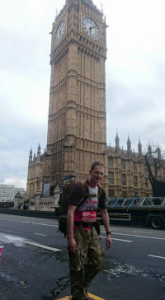 Not another runner in sight!

On reaching The Mall, Liam said “I came round the corner just by Buckingham Palace into the home straight and there was a sign saying ‘200m to go’ then workmen started taking it down.”

Of course for Liam achieving a respectable finishing time wasn’t the goal, he had completed the entire 26.2 mile course carrying his army rucksack containing 30kg! Liam was inspired to take on this monumental challenge after seeing his 86 year old grandmother successfully complete her own course of treatment for breast cancer.

And the serving soldier – a veteran of two tours in Afghanistan was overjoyed to see her waiting for him at the finishing line.

When asked by reporters how he felt after finishing the marathon, Liam refused to acknowledge the discomfort he must have been feeling, “its nothing compared to a course of chemotherapy” he replied.