Chair of Trustees, Richard Bahu, was recently interviewed by Scientia magazine about Against Breast Cancer and the challenges facing breast cancer research. 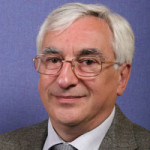 How did Against Breast Cancer come to fruition?

The total focus of Against Breast Cancer (ABC) is to stop secondary breast cancer from claiming lives. ABC was founded by Dr Anthony Leathem and his wife Patricia. At the time, Anthony was a pathologist at the Middlesex Hospital (later University College London) and his wife Patricia was a breast cancer theatre nurse at Oxford’s Churchill Hospital. They were deeply upset by the number of post-mortems he carried out each day on young women with breast cancer. They had to act by personally fundraising to support his research into breast cancer survival. This included Patricia planting their entire allotment with sweet peas to sell, and Anthony in his white coat outside Oxford Street tube station with a collection tin! Anthony’s research paper describing a difference between aggressive and non-aggressive breast cancer cells was the springboard for setting up ABC in 1993.

How does Against Breast Cancer support research? What types of research do you fund?

Our research strategy is set out in our Roadmap with three key areas: prevention, detection and new therapies. Prevention includes understanding how diet and lifestyle factors affect the risk of cancer recurrence. Detection aims to design better tools for the earlier detection of secondary cancer through biomarker discovery. New therapies aim to exploit the body’s immune system to create more effective treatments.

Our research strategy has created a significant critical mass of world-class researchers at Southampton University. We complement this with seed funding of researchers who have an exciting research idea but insufficient background research to apply for major funding. Often, these seed-funded projects enable them to successfully apply for major follow-on programmes. We are also committed to encouraging and developing young scientists in breast cancer research through a major fellowship programme at Oriel College, Oxford University.

How is the general public involved in your work?

We wouldn’t be where we are today without the involvement and support of the public. We have amazing supporters who help raise funds for our research projects. There are many ways people get involved, from taking part in local and national events, corporate giving, donating bras and clothes, volunteering their time and skills, and providing touching case studies. We are also grateful to those who leave a legacy in their wills. Some major companies and organisations choose ABC as their charity of the year and we work with them to give their staff a positive experience of our charity work. We also have research advocates who are people with experience with breast cancer and who provide valuable input into the types of projects that we fund.

One amazing and extremely moving example is that of Danielle. She was the focal point for a fundraising campaign in which a lock of her hair taken before her treatment was turned into diamond – the world’s most precious stone. At the end of the campaign, the diamond was incorporated into a necklace by a leading designer and donated to her young daughter.

We are, of course, in the midst of the COVID-19 pandemic. What specific difficulties has this brought to the work of Against Breast Cancer?

Clearly, this has had a dramatic effect not just on our fundraising but also on our staff and supporters. Being a smaller charity, we can react quickly to these challenges. Our team has risen to the challenge by being creative in moving activities online and into a virtual world. We have retained all our staff whilst other charities have sadly let many people go. This is a reflection of the lean management of the charity by an outstanding management team. We have also benefited from prudent management of our funds which has enabled us to cope robustly with the financial pressures.

There has been an impact on our research and with our full support, some of our researchers have joined the effort to combat the virus. However, we have been very pleased with how our researchers have sought to move their projects forward wherever possible. Again, we have continued to support all our funded projects and do not envisage cutting back any of them.

What would you say are Against Breast Cancer’s biggest achievements to date?

Reaching our 25th anniversary in 2018 was a big milestone for the charity. We are particularly proud of achieving our Biobank which is a collection of samples and lifestyle data collected from over 3,000 women over a period of 5 years post-cancer diagnosis. This is such a valuable research resource and one of the largest of its kind in the UK. To date, our research funding has now exceeded £7m and we have laboratories located at one of the world’s leading centres researching secondary breast cancer. ABC’s committed funding up to 2028 sees a portfolio of £4.5m with further funding envisaged for seed grants.

Looking now to the future, what are the main challenges and goals for Against Breast Cancer over the next 5–10 years?

ABC is now on a clear path to have a major impact on secondary breast cancer deaths over the next 5–10 years. The biggest challenge is managing the expectations of our supporters as they obviously want quick results whereas the complexity of the research requires a steady and sustained long-term effort to which we are committed. This means we have to provide clear and truthful communication about our research as often people see articles in the press and on social media which talk about breakthroughs but which often are still some way from being implemented in clinical practice.

The original article appeared on Scientia. Republished with under the Creative Commons License.