The Girlguiding approach to bra recycling

Isabel with a few of the bras collected

We first encountered the Girlguiding approach to bra recycling a short time after Isabel came across an article in Girlguiding magazine whilst on a car trip with her grandparents. The article, Isabel’s mum remembers, was about a group of Guides who were collecting bras for charity.

Isabel immediately set about convincing her mum to let her pack their house with recycled bras before she began collecting in earnest. Following a very encouraging start (57 bras in the first week), she decided to recruit her Guide Leader as well as her mum to put out the word to their colleagues. She set herself a target of 500 bras which she was determined to reach by the end of the school year.

Realising she needed to keep up her momentum, Isabel contacted her local paper, The Frome times and immediately saw a large increase in donations after her story was published in July. The story was in turn picked up by the Mendip Times – and the bras just kept on coming!

By the time she reached her thirteenth birthday in August, Isabel had comfortably beaten her target, modestly describing the accomplishment as “my own little birthday present“. She then set her next goal at 750 bras by Christmas. Isabels mum’s was beginning to see a much more ambitious side to her daughter!

Within a month the collection passed 1000. Her success bolstered further by another story in the local press, this time in the Somerset Standard. 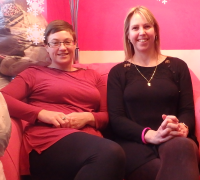 Isabel finished her fundraising marathon on a real high in December by turning to local radio station, Frome FM who came to her aid through presenter Dawn Denton. Dawn was so inspired by Isabel’s efforts, she stepped up and agreed to personally make the 160 mile round trip in order to ensure Isabel’s collection of over 1700 bras to us made it to us without delay.

Thank you Isabel, you are a real credit to Girlguiding, we hope your confidence and determination inspires other young women just like you to make a positive difference, not just in their local community, but to the wider world too.