It was with great sadness that we learned the news of Julie Cowell’s death. Julie became a great supporter of Against Breast Cancer while receiving her own treatment in 1995.

Julie’s diagnosis required her to have a lumpectomy and her lymph nodes removed, it was during this treatment that she became firm friends with her cancer specialist, Dr Margaret Spittle OBE, a Trustee of Against Breast Cancer. Through this relationship Julie’s support for the charity was born.

She became a great advocate of our research, sharing her own story with us and fully supporting our search for a vaccine, her involvement would soon lead her to become a Patron of the charity alongside her son, Simon.

It was Simon’s TV career that would propel her into the spotlight, a position that she occupied with grace, a skill that made her highly sought after by journalists and broadcasters.

Never passive, Julie was a natural fundraiser who took the opportunity to raise money wherever possible, even selling some of Simon’s suits and jumpers as he was on the road to becoming the household name we all know him as today. 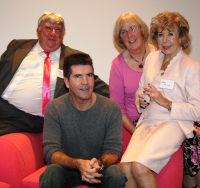 In 2009 Julie accepted the position of Honorary President of Against Breast Cancer. She spoke passionately for the charity on a number of occasions. At our 15th Anniversary event at BAFTA, London in 2008 she was accompanied by 4 of her children – Simon, Nick, June and John.

Charity founder Patricia Leathem and the original head of research, Dr Anthony Leathem said: ‘Julie was a delightful supporter, an ever cheerful, determined, brave lady. Willing to travel long distances by car to support events and give interviews, even well into her 80’s. A lovely person – we will all miss her!‘

More recently Julie felt the need to take more of a back seat, but she continued her involvement, showing an interest and giving encouragement to the research team and charity staff whenever possible.

We will all miss her and know that her children, who were all very close to her, will miss her terribly. Our thoughts are with Simon, Nick, Tony, Michael, John and June.