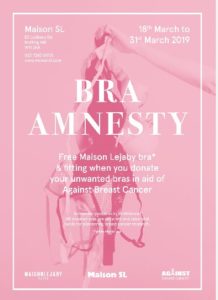 Owner Susana Lorena decided to encourage her customers to donate their old or unwanted bras by giving them a free Maison Lejaby bra and fitting explained, “The more bras we collect, the more Against Breast Cancer will benefit so we called on women to sort through their drawers and turn in their unwanted bras safely and anonymously as part of the Bra Amnesty.”

The campaign drew national attention from the Independent newspaper too who chose to feature in in their Happy List – generating loads of attention for the local business on social media!

We are calling on women to sort through their drawers and turn in their unwanted bras safely and anonymously as part of the Bra Amnesty.

Many women have drawers full of bras they do not wear or want and a Bra Amnesty is a way of putting those unwanted bras to good use.

Donated bras raise money for the charity who, through their partners, send them to countries in Africa, such as Togo, Ghana and Kenya, where bras can be expensive to produce locally.

They help support small businesses too. The bras are bought by local traders and they in turn sell them at affordable prices locally. It is a great way of helping the local economy and employment. It is also good for the health, status and safety of women in these countries, where bras can otherwise be expensive.

Bras which are beyond redemption are dismantled and properly recycled rather than being thrown away, where they would end up in landfill with other unwanted clothes. The environmental problem posed by discarded clothing is enormous. It is now the fastest growing category of waste, polluting the planet in the process. In the UK alone some 300,000 tonnes of clothing end up in landfill each year

Bra recycling donates £700 for every tonne of bras collected to fund Against Breast Cancer’s research.

Such was the success of the Maison SL campaign, that they are already planning next year’s amnesty.