Pretty in Pink – The Witney in Pink Story 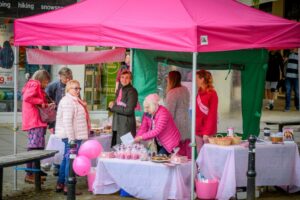 Jeanne Chattoe was born and bred in Witney. Although she moved away once for a couple of years she came back, “I absolutely love the place. My sister Delia also lived in Witney. My dad was a Witney man through and through but my mothers’ family moved here from London during World War 2.

“When I first started fundraising breast cancer wasn’t talked about. Indeed, my sister Delia and I knew virtually nothing about it. We just thought you had the op and that was it, we didn’t know it could spread which is what happened in Delia’s case. She was 30 years old when diagnosed. Since then I have had breast cancer twice as has my elder sister. My mother died from it in 2018 aged 92. So you see breast cancer has played an enormous role in my life.

“I have been a Trustee for Against Breast Cancer (an Abingdon based charity funding research into the secondary spread of breast cancer), I was also Chair of Trustees for over 10 years.

“I had already been fundraising for them for 15 years when, waking up at three in the morning and unable to sleep I came up with the idea of ‘Witney in Pink. That was twenty years ago and is the only event which takes place in the centre of Witney.”

“We heard so many sad stories, pink day is not just about raising money but also about raising awareness and it’s about remembrance too. It was a very humbling day for me. It was amazing to have so much support. The people of Witney are incredibly generous and I can’t thank them enough.” 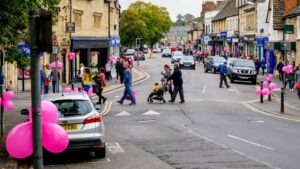 “I was working at Delia’s shop, Top Bags when Witney in Pink first started. It started off quite small with just me and my husband delivering letters to all the shops and putting up (and taking down!) all the balloons. After my sister Delia died (at the age of 41) I decided to open my own business Renaissance, which I ran for 15 years.

“It was the hub of Witney in Pink. The place where we blew up 1,000 (biodegradable) balloons and distributed them throughout the town the next morning. Tying them on lampposts, bollards and basically anything that stood still – then taking them down at the end of the day. The night before WIP my shop was full of balloons, cakes and bric-a-brac that people had dropped off.

“I then started a Witney Against Breast Cancer Action Fundraising Group and although the members have changed over the years there has always been a hard core of members which has enabled ‘Witney in Pink’ to become as it is today. Having started off small with the help of my family and friends with just a street collection and cake stall. Over the years it has grown considerably, we still have a street collection but have added a tombola and street entertainment.

“The support from local shops has been amazing, in particular Bakers Butchers and The Shake Shop. All the window displays are awesome and as soon as anyone comes into Witney they know that it is Pink Day. That is why we use balloons – it is instant awareness of what is going on.”

A colossal amount of organising 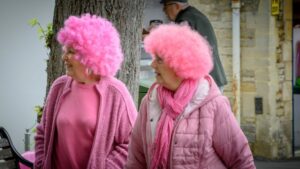 “Without the help of group members it couldn’t be done. It takes a colossal amount of organising and is exhausting; it doesn’t get any easier, but it’s not just about raising money (although that’s the main reason) it is also about raising breast cancer awareness.

“The public have always been so supportive and generous. I have had young men empty their pockets into my tin. I have heard many sad stories but also many happy ones. It has been a rewarding experience in many ways and over £250,000 has been raised by this annual event alone.

“Thank you Witney, for your support and generosity and helping us to raise so much money for research into breast cancer – a disease which affects so many people. Things have come a long way since I started fundraising in memory of my sister Delia and I hope that soon in the future there will be a cure.”

“I am unsure of the future of Witney in Pink. I obviously would like it to continue as it is now part of Witney’s event calendar and has been a tremendous achievement but I am not getting any younger and no longer feel physically able to do it. Over my fundraising years I have raised over £500,000. Without the help of my family, friends, The Witney Against Breast Cancer Team and of course the amazing generosity of the people of Witney this could never have been achieved. I am sure it has brought us closer to finding a cure for breast cancer and Witney in Pink has played a great part in that.”

Article first appeared on I Love Witney, reposted with permission. Photographs courtesy of Derek Hall Photography. If you are inspired by Jeanne’s story, you can arrange a Splash of Pink in your own community.