Iris was the matriarch of her family. She was a friend, a babysitter, a role model and a woman who had overcome cancer twice.

Despite her superwoman strength and determination to fight, in February 2017 Iris passed away. Iris was an active fundraiser for breast cancer charities throughout her life and her legacy continued at her funeral. The men in attendance wore pink ties and pink ribbon pin badges were sold in aid of Against Breast Cancer.

In memory of Iris, Dan decided to fundraise for Against Breast Cancer by abstaining from alcohol and junk food for the entire Wiltshire League cricket season. He lost 1 stone 10 lbs and had his best cricket season to date with 500 runs and 15 wickets. He also found that he had more energy to help his wife with their firstborn son’s night feeds. 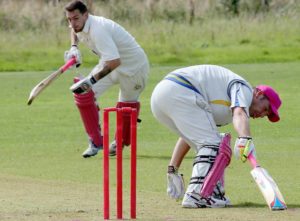 Pink Saturday was born out of his clubs support for him and took place in August 2017 at Swindon United Churches’ ground. The players wore pink caps & pads and used pink stumps and bat grips. Pink Saturday was an opportunity to bring partners and families along and proved both popular and successful, raising over £1000 for breast cancer research.

In 2022 Pink Saturday will be open to every club in the Wiltshire and Oxfordshire and surrounding League’s to participate in, clubs can choose how and when they want to hold their own Pink Saturday and proceeds from the day will be split equally between each club and Against Breast Cancer.

For more information on how Pink Saturday can raise vital funds for breast cancer research and benefit your club please contact us using the form below.