Clare was diagnosed with breast cancer in May 2021 aged 39. Here she explains how confidence and courage empowered her during her breast cancer treatment.

The lump came out of nowhere and was very big. My doctor sent me for an ultrasound and then a biopsy. Two months later I was diagnosed with invasive lobular carcinoma breast cancer. 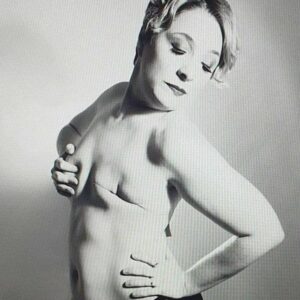 It was such a shock but I maintained a calm positive approach to the whole thing.

I had a mastectomy that September followed by a full axillary clearance six weeks later and I recovered quite quickly and felt well.

Even though losing my breast was hard I looked at myself In the mirror and told myself ‘it’s ok you still look great and you’re still you’.

Afterwards I did a topless photoshoot to boost my confidence and to show off my mastectomy scar. This was not only for me but to raise awareness raise money and to promote body confidence after breast cancer treatment. To prove to other women you can still look fantastic, sexy and confident, and to be proud of who you are.

Following this was chemotherapy. The thought of losing my hair was daunting but on my daughter’s tenth birthday on the 13th December my husband shaved it all off, and I felt amazing afterwards really liberated and great in myself.

“I had people say to me ‘how do you do that? I wish I had your courage’ and I just told them you can do it.”

I had six cycles of chemo between November and March. It was gruelling and hard going but I carried on embracing the bald look, going to restaurants and walking outside. Sure people stared, it was hard to see, but I just had to ignore and hold my head up high. I had people say to me ‘how do you do that? I wish I had your courage’ and I just told them you can do it. 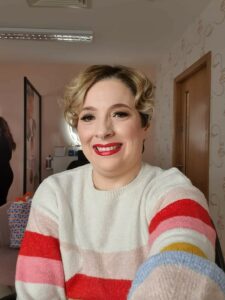 I’ve adopted a positive mindset all the way through everything, it’s been the only way I could get through it. I’ve made jokes, made funny dancing dress up videos with my daughters Amelia and Eve, fundraised and supported other friends of mine who are also battling whilst going through my own journey. Cancer is serious enough without taking it seriously that’s why my positivity has shone through.

I have finished active treatment and I am now cancer free. I am on Tamoxifen for the next ten years, and getting better bit by bit.

I actually love my body more now than I did before and if I can empower more woman to feel the same way I did. It would be fantastic as they all deserve to look at themselves and feel beautiful and that the scars are a testament to bravery, power and strength.

“I actually love my body more now than I did before and if I can empower more woman to feel the same way I did.”

In a way I’m so grateful for the cancer as its completely changed my life I live for now to the fullest and I want to help women feel beautiful, normalise mastectomies and raise money to one day find a cure and to save lives.