Publisher Shireen received her diagnosis and underwent treatment during the pandemic. She wouldn’t let it stop her and now campaigns to improve support for women with breast cancer in Dubai

Shireen Jabry, a magazine publisher and mother to a young son, was diagnosed with Stage 3 Breast Cancer in December 2019, and went through rigorous treatment in London before moving to Dubai. ‘She created the CAB campaign to empower women who have had cancer and here she shares her story of treatment and the logistical difficulties of moving to another country after having cancer.

I discovered a lump in my breast in mid-October 2019. I previously had a fatty cyst on my waist on the same side as the lump that I discovered. I had had it removed so I thought maybe it’s beginning to grow in my breast but then I just had a very bad feeling. I just felt there’s something wrong because of the location and it’s only on the right breast.

I panicked and I didn’t go to the doctor. I went on a half-term trip to Paris with my son and my now ex-husband. It’s just like I ignored it. When I came back I wanted to focus on my magazine and I thought no, I’m just imagining it.

In November, I began thinking I should go see the doctor and only went at the beginning of December. They then referred me to the breast care surgeon, who I saw in the middle of December. That’s when I was diagnosed and discovered that the tumour has been there for nearly two years, not the two months that the lump had been there. I always assumed that when the lump first appears that’s the start of the cancer.

I always assumed that when the lump comes out it’s the beginning of the cancer. 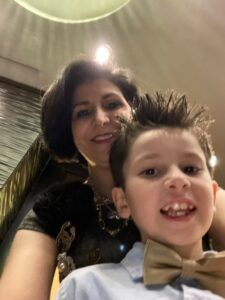 I had 17 sessions of chemotherapy, two operations and radiotherapy before I was pronounced cancer free in August 2020. I found that there’s many different types of breast cancers. Mine was HR2 positive breast cancer, which means the cancer feeds on oestrogen and that they needed to induce an early menopause.

But the good news is, when you’re HR2 positive instead of triple negative, after they get rid of the cancer, they can hopefully stop it from coming back because they kill the oestrogen in your body by inducing your menopause. Then they give you an injection every month for ten years and with the hormone pills they make sure that you never produce any oestrogen.

Sustaining myself through all of my treatment was hard; it’s not just the medical and physical, it’s the psychological. It’s like when I entered the doctor’s office, I was me, and when I left, I became a totally different person because of what they tell you. I just wanted to be me and look like me and I wanted to make sure I’m OK. Not from a medical point of view, because the doctors were dealing with that, but from the psychological point of view.

After I was pronounced cancer free in August 2020 and when my hair started growing back in October I took a vacation for 10 days to Dubai to visit my friends there. Those 10 days were the first time I thought ‘my eyebrows are full’ and ‘my eyelashes have grown back,’ which made me feel that people don’t know that I’ve gone through chemo. It just looks like I have a short haircut that is funky.

I felt good seeing old friends and being in an environment where I have never had cancer. I almost tried to forget, as I feel you can’t heal in an environment where you got sick. Although London is not responsible, I don’t remember the memories before chemo. That’s when I sat with myself and thought I’m not sure, but let me think about it more. And in February 2021 I actually made the move.

I needed to be on the Zoladex* for the next 10 years and I asked my oncologist what happens if they don’t have Zoladex injections in Dubai. He said ‘don’t worry, all over the world they have this injection, but you’ll have to go into hospital for it to be administered. The hormone pills are not a problem. Bupa will pay for them and I can always send you a six months’ supply or you can take six months with you to Dubai. But you will need six monthly check-ups which your insurance will not cover.’

My doctors could not tell me much about the UAE in terms of Zoladex. So I had friends in the UAE who were helping me out to ask questions and I was speaking to so many insurance companies to try to figure out a way to be covered and I thought ‘how my God, how am I going to do this?’ At one point it got to the extent where I hated being in the UK because I was overwhelmed. It felt everywhere I was turning to make this happen, another wall came up.

I was speaking to so many insurance companies to try to figure out a way to be covered and I thought ‘how my God, how am I going to do this?’

After I came back in November from my trip in Dubai I spoke to my oncologist and said I needed to speak to a therapist and he’s like yes, I think that’s a great idea. They had offered it to me throughout the treatment, but I didn’t want to see another ‘doctor’. He put me in touch with somebody twice a week on the phone, because of COVID.

I spoke to her before I was going to make my decision in January to leave or not. And she said ‘if you’re waiting for a time when it’s going to be an easier decision or not, it’s never going to be easy. Every decision you’re going to make from now is very difficult, but you’ve got to do something because I can see you falling deeper and deeper, so take the plunge. You may not have to go forever. Maybe go for two or three weeks, maybe the worst case scenario is it’s been a holiday for one month or two months so that you needed to get away, and you come back or otherwise you figure it out and you stay.’ And that’s what I did.

Because of my cancer I suddenly realised time waits for no one and I thought ‘you know what, I’ve got enough figured out right now.’ If anything presents itself, you will figure out how to react and adapt but you cannot wait for things to be perfect, because they never will be.

The idea is, everybody that enters a taxi or cab has their own personal journey and we’re trying to help you with this. We’ve come up with a slogan ‘don’t fear, we’re here’ and the reason for this is because back to my own experience when you have a diagnosis, I would have loved to be able to add a WhatsApp number and text anything to a person, 24 hours a day, 7 days a week, and not a hotline or crisis number. I don’t think there’s anything of that sort because you’re not in your right frame of mind when it’s happening.

I wanted to give something that I think would have been a relief for me, no matter how many friends or family are involved in helping you. It’s to be able to just quickly, no fuss, add the number, say the voice text, and there’s automatically another person there. If you want an email they’re there, there if there’s phone, they’re there. You just want an angry outburst they’re there, 24/7. This is what I want to create because back when I was going through it, it’s what I would have really needed.

I also launched the first issue of a magazine promoting breast cancer awareness which is called The Hot Pink Issue magazine in December. The idea came about because when I used to sit in the chemo units, especially when it was through COVID and only the patient was allowed through the hospital door. You watch Netflix and you have tea while they bring you food but at the same time, no matter how many people are with you, you’re still feeling quite lonely.

For me if there was something called The Hot Pink Issue where I can just randomly open it at any page and at a glance I can see people’s stories of what they’ve gone through and maybe a cover story of a celebrity who went through breast cancer. Maybe then it will start resonating with me. ‘Oh I feel lonely. I feel this. I feel that.’ But you know that they feel it too. It’s so normal and look how they’ve come out on the other side.

For more information on travelling with cancer visit the Cancer Research UK website.