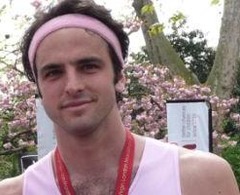 Elliott Freer is one of our Gold Bond runners, and Against Breast Cancer’s very own ‘marathon man’. He completed April’s London Marathon in an impressive four hours, and describes the experience for armchair athletes everywhere…

“Four years ago my mother was diagnosed with breast cancer. Fortunately she was one of the lucky ones, and with a great deal of treatment and care she was able to fight this awful disease.

But it was only through the research programmes of charities such as Against Breast Cancer that this was possible, giving thousands of women around the world like my mother a greater chance of long-term survival.

There was never any doubt that Against Breast Cancer was the right charity to run for. My Mum and everyone close to her saw the benefits of the various treatments that are now available. Against Breast Cancer focuses its work on improving these treatments. It’s clear to me that research, coupled with raising awareness of the dangers and symptoms of breast cancer have helped to improve the survival rates in recent times.

I was at university when my mother was diagnosed and if the worst had happened then it would have broken me. When I knew that she might be cured and that I could help by raising money, I felt more positive. I couldn’t help but think of the people in similar positions that may have had no hope, no solution, and the devastation and helplessness that they must have felt inside. This is why I needed to run for Against Breast Cancer – and for my mum.

I knew that I wanted a challenge. I had friends that had walked and climbed giant mountains, rowed great lengths of river, cycled the breadth of countries and numerous other enviable tasks. However, none of these quite fitted the mould for me. Then, in 2009, I went to support my girlfriend Emma who was running in the London Marathon for the charity ‘Kids’.

I was taken aback by scale of it, the way that London’s roads were transformed into galleries of supporters. I went to watch with her family at various points along the course, first at Tower Hill, then at Canary Wharf and finally at the finish line in St James park.

The support was amazing and the noise was fantastic, and even though every step felt like a mile and every mile felt like an eternity it was here that I remembered why I was doing this – for my mum.

The whole experience was amazing, totally unlike sitting in a rugby or football stadium: we were pressed against the railings and could see how every shout and cheer of encouragement lifted the runners. Every time Emma received some support her spirits lifted – it was a fantastic thing to get involved in, even just as a supporter.

I suppose that it was really from this, from everything she had done building up to it and from speaking to her afterwards that I knew that this would be something that I wanted to attempt to do. Of course, the day itself is the star and the thousands of people that come to support, many even without any friends or family running.

In the end, I enjoyed every single moment.”