Skip to main content
I love you all, I have loved every minute of it and if I could I would do it all again

In 2004, Helen lost her mother, Jane, to secondary spread breast cancer. Thirteen years on, she ran the London Marathon in her memory, the year that would have marked her mother’s 60th birthday. This is Jane’s story.

Just before her eldest son was born, Jane, fulfilling a long-held ambition, embarked on an English literature degree with The Open University which would help her to stay productive whilst on maternity leave. She postponed her studies after two years to focus on family life and decided to continue with her degree when Helen was fifteen years old. Not long after, she found a lump.

Initially, the lumpectomy produced a negative result. However, by the time a breast cancer diagnosis was confirmed, the cancer was at an advanced stage and had spread to eight lymph nodes. Invasive lobular breast cancer can be difficult to diagnose due to the lack of obvious changes to the breast and can prove difficult to treat due to its resistance to hormone and protein driven therapies.

Helen’s parents were open and honest from the outset and the children assumed active and informed roles, from accompanying their mother to chemotherapy sessions to Helen being taught by nurses how to flush the intravenous lines.

Jane went into remission for six months within the second year of her treatment, but after experiencing pain in her shoulder, a scan revealed that spread had occurred. The remaining four years consisted of almost constant chemotherapy and radiotherapy as the cancer travelled in a fibrous manner through the tissues in the shoulder towards and over the meninges of the brain. The types and routes of chemotherapy were updated frequently and Jane was offered a couple of drug trials, which she was keen to participate in as it would allow her to use her experience to help others in the future, but unfortunately these trials proved to be unsuitable for her.

Despite the constant treatment and symptom management, Helen’s parents made a concerted effort to ensure that cancer did not take over family life. Jane saw her illness as being as much about her spiritual wellbeing as her physical health. Maintaining her spiritual health enabled her to keep a balance despite what was happening to her. She had many clergy friends, some through the miscarriage association which she set up to use her own experiences to help others going through something similar. One clergy member once remarked that he felt that he had ‘let Jane down’ as he doubted his own spiritual strength to maintain that balance over so long a time, to maintain that strong sense of identity, that refusal to allow the cancer to define who she was or how she behaved beyond what was absolutely necessary.

Helen’s mum was also determined to finish her degree regardless of the toll the disease and treatments were taking on her body. As well as being an enormous sense of pride, the award of her degree provided a welcome alternative topic of conversation. Jane’s husband and children attended her graduation ceremony to celebrate her receiving her high second class honours.

Sadly, Jane’s prognosis was terminal. Jane knew what was happening but she firmly believed in the continuity and connectedness of love and she embraced her death as fully and as deeply as she embraced her life. As she said to her family ‘I love you all. I have loved every minute of it, and if I could I would do it all again’. Jane’s bravery was evident as was her determination to grieve with and for her family.

By the Easter of 2004, her mobility had been severely affected. The whole family respected and accommodated her wishes to remain at home and control the administration of her own pain medication. The secondary spread to her meninges interfered with her lucidity and morphine would further cloud her thoughts. Due to this, Jane sought to find a balance between a bearable level of pain and an adequate level of cognitive functioning that allowed her to engage with her family. Helen describes those final four months as consisting of a plethora of somewhat contradictory emotions and experiences, from the humbling and wonderful to the traumatic and heartbreaking. She is glad she got to experience those moments with her mother, moments that she may have missed if her mother had not been able to stay at home. The whole extended family played crucial roles in Jane’s everyday care. Helen and her younger brother, Peter, would read to her endlessly from PG Wodehouse’s Jeeves and Wooster, beside the hospital bed situated downstairs. Jane passed away just one week before her 47th birthday. Helen and Peter read an extract from the book as a tribute at her funeral. 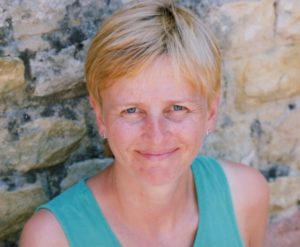 Every anniversary is marked by placing flowers or lighting candles. It is a family belief that ‘each person has two deaths; one when the person physically dies and the second when the last person remembering them dies.’ By remembering a loved one who has passed away, they remain a part of your life, a promise Jane made to her family.

Although Jane had a particularly aggressive and difficult form of breast cancer, she had friends who were diagnosed around the same time as her who are still alive. Helen feels that ‘cancer needn’t be the death sentence that it all too often is’ and it was the hope of new, improved treatments emerging from research that kept her mother alive for so long.

Helen never identified as a ‘runner’, even school reports from PE teachers simply said ‘Helen tries very hard’ but after moving to London in 2009 and watching the London marathon from the Embankment, she set a goal to run in the London marathon in memory of her mother. Helen wanted to run not for the past, but for the future and for research that could ultimately increase survival. 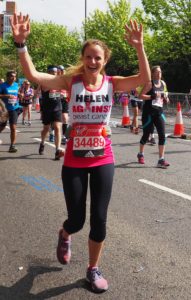 She decided that for two weeks she would run every day until her lungs stopped hurting and she stopped ‘walking like John Wayne’ afterwards. Soon after, she signed up for her first 10K and half marathon and spent several years doing half marathons whilst trying to secure a place in the London marathon through the ballot. She eventually managed to secure a place to run for Against Breast Cancer.

For Helen, the mental toughness and resilience required to train for and complete a marathon resonates with the mental toughness her mum showed when facing her own death and coming to terms with having to leave her children behind. Helen describes feeling as though her mum ran it with her, a tribute made more poignant as this year marked what would have been her mother’s 60th birthday.

Helen didn’t stop there however and completed her second marathon in Exeter alongside her uncle that same month.

Helen’s efforts have not only raised a great deal of awareness in to the secondary spread of breast cancer, but have also raised over £2,700 which will go towards the vital research aimed to improve the detection, treatment, and prognosis of secondary breast cancer.