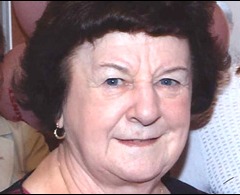 Mollie’s experience of breast cancer was unusually traumatic. For two years she felt certain she had cancer, while the medical profession insisted otherwise.

“I was in my mid sixties and enjoying retirement after 34 years as a careers adviser when I noticed a discharge from the nipple of my left breast. It looked just like weak tea and at first I thought I’d spilled something. When the discharge continued I was referred to hospital but the consultant offered no explanation. The mammogram revealed nothing, so he prescribed antibiotics. “The discharge continued over the next few months but my GP assured me I was in good hands and there was nothing to worry about. “Then I became very frightened when my breast began to swell like a balloon. I went back to hospital but, unfortunately, saw the same consultant. He gave me intravenous antibiotics, but still insisted there was no cancer. You can imagine how worried I was that no one could explain my condition. In fact, one of the nurses said it could be ‘dust in the milk ducts!’

“Eventually I asked for a second opinion and saw Mr Demitri Hadjiminas, A consultant at St Mary’s, Paddington. He was my saviour. Although, an initial mammogram didn’t show any obvious cancer, he continued to monitor me and later carried out needle aspirations on the breast. The biopsies showed I had widespread DCIS (ductal carcinoma in situ), cancer of the milk ducts.

“Mr Hadjiminas explained the condition very patiently and considerately, but I was shocked when he told me I needed a mastectomy. I was terrified as my stepmother was left with bad scarring after a mastectomy and I’d always dreaded it might happen to me one day. I couldn’t accept this was my only chance of long-term survival and sought a third opinion at the Royal Marsden. They confirmed the cancer and six months after the first diagnosis I reluctantly had the operation.

“I chose to have breast reconstruction at the same time as I wanted to get it all over with in one go. I’d have felt odd looking unbalanced and wanted to feel as normal as possible. Fortunately, I didn’t need radiotherapy and, ten years on from the operation, I only need annual check-ups.

“I found support groups like the one run by the St Mary’s breast specialist nurses Helen Froyd and Vickki Harmer [an Against Breast Cancer trustee] a great help as you could share your story, and your fears, with people who’d been through the same thing.

“My late husband gave me wonderful support when I was struggling to get an accurate diagnosis and he helped me come to terms with the cancer. I liked writing and committed my darkest thoughts and feelings to paper. It helped me cope and clarify my mind so I could move forward. I’m now writing a family memoir and have had ten poems published in the past 18 months.

“I feel breast cancer has made me more understanding. Such an experience helps you to make the most of each moment and realise what’s really important in life. So, I’m taking my friends and family out to lunch in June to celebrate as its ten years since my operation.

Mollie first came across Against Breast Cancer when Dr Anthony Leathem came and talked to St Mary’s support group in the guise of Father Christmas.