My husband Steve and I have a Brady Bunch family, with a total of eight children and one grandson. Four of the kids are from his previous marriage, and four from mine. I love my job managing a team of business development specialists.

I’ve always enjoyed personal development and finding ways to improve myself. But despite this, I never learned to live in the moment or found much joy in my day to day life.

Steve and I love to travel, but during the first 7 years of our marriage, we never seemed to find the time or money to make it happen. I’ve had many dreams on my bucket list. I had many ideas that never seemed to get off the ground. They would hide in my notebooks and journals.

My first husband and the father of my four sons and I had a strained relationship. We haven’t felt comfortable with each other since the divorce. We would attend high school graduations and hardly speak to each other.

I’ve always been physically healthy, and I’ve never had more than the flu. For most of my life, I didn’t understand people who have a chronic illness, and in hindsight realize I was not empathetic towards their situations.

Before my cancer diagnosis, I had been experiencing menopausal symptoms and was working with a doctor and using bioidentical hormones specifically progesterone and oestrogen to help regulate the hormonal symptoms.

I’ve had a routine of scheduling mammograms the month of my birthday each year. I showed up for my yearly physical in October of 2015 with a new gynaecologist. I let him know that I was due to have my annual mammogram. The doctor told me that he believes that mammograms can cause cancer. He gave me a thorough breast exam and sent me on my way.

Two months later I was having a shower and noticed a lump in my right breast. It seemed to appear overnight. It was not painful, and I wasn’t concerned about it.

Four months passed, and the lump hadn’t changed. I then scheduled a mammogram. At that appointment I found myself looking at a computer screen with a radiologist telling me that it was possibly highly suspicious that the lump was cancer. He urged me to see an oncologist as soon as possible and that I would need a surgeon for a biopsy of the breast.

I had the biopsy a few days later. A call from the surgeon told me that the tissue was malignant and that I would need chemotherapy and radiation. He also mentioned that the margins looked clean and he felt cancer would not have spread beyond the breast. I chose to have a port placed for the chemo infusions and during that surgery also had a sentinel lymph node biopsy. Nine lymph nodes did show cancer and those specific nodes were removed surgically at that time.

Next, a PET Scan was planned, and a week later I showed up at the oncologist for my first chemo appointment. On that day I was told that my scan results showed cancer in my liver, lungs, and my back. My diagnosis was now stage four and my prognosis two to ten years. I also had a brain MRI that did not show any sign of cancer.

My oncologist works closely with The University of Utah and the Huntsman Cancer Institute. I learned that the cancer was aggressive but that I was a candidate for a newer treatment that has good results for hormone positive breast cancer. This chemotherapy drug is Herceptin. I was also prescribed Anastrozole and Clonidine to take daily. 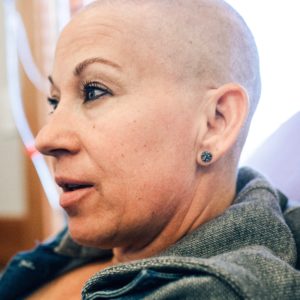 I initially had four chemo treatments and then had a repeat scan. The scan showed improvement and my treatment plans were changed at that time.

The treatment plan was now to have the Herceptin infusion every three weeks, with a quarterly Lupron shot to suppress my hormones. I continued to have Xegva shots to promote healthy bones every six weeks.

This all paid off, and in March of 2017, I had a repeat scan that showed no evidence of active disease (NEAD). Because my breast cancer had already spread to other organs, I would need to continue the Herceptin. For the foreseeable future. I am grateful that my body tolerates the Herceptin well.

Lupron injections caused me to have bone and joint pain daily. I developed knee pain when taking the stairs. I was unable to do any physical activity for more than a short period. I did not feel that I was enjoying a good quality of life. After over a year of hormone treatment with (Lupron), I insisted on having my ovaries removed so that I would no longer need to take Lupron. I was 54 years old and did not need my ovaries, and years earlier had undergone a partial hysterectomy. Only a few months after that surgery my muscle and bone pain diminished greatly, and my quality of life improved significantly.

In December of 2017, I had an MRI that showed metastasis in my brain. I underwent stereotactic radiation and I responded well to this treatment. The metastasis had decreased when I had a repeat MRI three months later. Six months post radiation an additional MRI showed the previous metastasis were no longer a concern; however, I had two new spots that we treated with stereotactic radiotherapy at that time.

My treatment will continue to be the same until I am no longer NEAD and then a different medication will be needed. As far as the brain metastasis I will continue to have MRI scans regularly. At some point, whole brain radiation may be necessary if the stereotactic radiation therapy is no longer sufficient.

It has been three years since my stage four diagnosis. A few things have changed but mostly my outlook on living life.

I am still working full time. I feel like I have an additional part-time job in just keeping up with my doctor appointments. My husband and I now travel regularly. Once we started to see improvement in the scans, we began to make travel plans. I find it helpful to have something to look forward to. I use these adventures as a diversion. I focus more on what our next experience will be and focus less on the unknown future of this terminal disease.

I have learned to live in the moment and be grateful for what comes into my life each day. I’ve grown in my understanding of chronic illness and have become much more empathetic to others. My disease and vulnerability have opened conversations with family members including my ex-husband and those relationships have improved.

I enjoy my work, and the team I manage; however, the monetary compensation is not my focus. I enjoy connecting with others and feel comfortable sharing who I am. 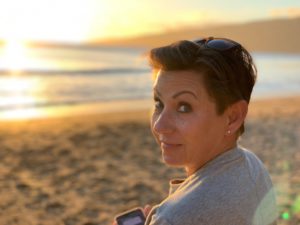 When I decide to do something new, I don’t hesitate. I started a blog that shares my own cancer journey. I hope that I can help others who find themselves with a terminal disease. I have only one life, and I am grateful for it. I spend time with those I love as often as possible. I don’t know if I have one month or ten more years, so I do my best to live each day as if it might be my last. I write this on a Sunday afternoon sitting in a tropical location with friends and co-workers. When I return home in a week, I will be going to yet another repeat scan. And I am entirely at peace with that thought. Because you never know what will happen next in your life.