Karen is a 51-year-old GP from Hampshire. She recently ran her first marathon to raise money for Against Breast Cancer after being diagnosed with secondary spread breast cancer in her sternum, chest wall and lungs.

Being a doctor was something I had always wanted to do. I felt driven to help others. After finishing medical school aged twenty-two, I joined the RAF and completed my GP training. I left the RAF in my early thirties and have been a family doctor ever since.

My journey with breast cancer started ten years ago in the summer of 2009 when I found a lump in my left breast. Knowing what this lump could be sent me into a panic, but I felt reassured when after investigation, it was found to be a cyst.

Six months later, I found a lump in my right breast. I was referred to the breast clinic again and by the time I went to my appointment two weeks later, another lump had become noticeable.

I went to the clinic on my own, a big mistake, and as the radiologist was doing the scan I knew that it was bad news. The biopsy followed the same afternoon. The hospital called my husband, who was in the middle of a busy surgery, and he came over to meet me.

Both lumps were found to be cancerous. I was diagnosed with ER+ stage 3 invasive ductal carcinoma. I thought my world had fallen apart. I was forty-one at the time with two daughters aged four and seven.

She gave me a children’s book to read to my daughters, which explained my diagnosis and treatment. I sat my girls down one evening with the book and once we finished it, I asked them if they had any questions. To my amusement, the only question was ‘so what’s for tea?’ It was such a relief after wondering how they would handle the news. My girls are very practical, just like me.

I had a mastectomy with full lymph node clearance just before Christmas. I remained well after the surgery and carried on with normal life. The only thing I missed out on was the ice skating, something we always did. But this year I found myself watching from the side with my drain in my handbag. In that moment, the reality of my diagnosis was clear. Even though I didn’t feel ill, I still had cancer. A difficult concept to get my head around.

In the new year I started FEC-T chemotherapy and for the first three cycles I did well. Knowing my immune system would be suppressed, I decided to take time off from work but continued to run and carry out my duties as chair of the parent-teacher association at my daughters’ school. I shaved my head as soon as my hair started to fall out and had a fabulous wig that I loved!

The T part of the treatment, with the introduction of docetaxel, was more difficult. Exhausting in fact, and by the last round I could barely get up the stairs by myself. The Filgrastim injections to stimulate my bone marrow caused terrible pains in my breastbone and hip. The radiotherapy a couple of weeks later was a walk in the park in comparison.

Whilst I had been undergoing my treatment a friend of mine, Helen, lost her husband to metastatic stomach cancer having herself had breast cancer the year before. It was a difficult time for everyone at school and I wanted to raise the profile of cancer and help the children understand what was going on. 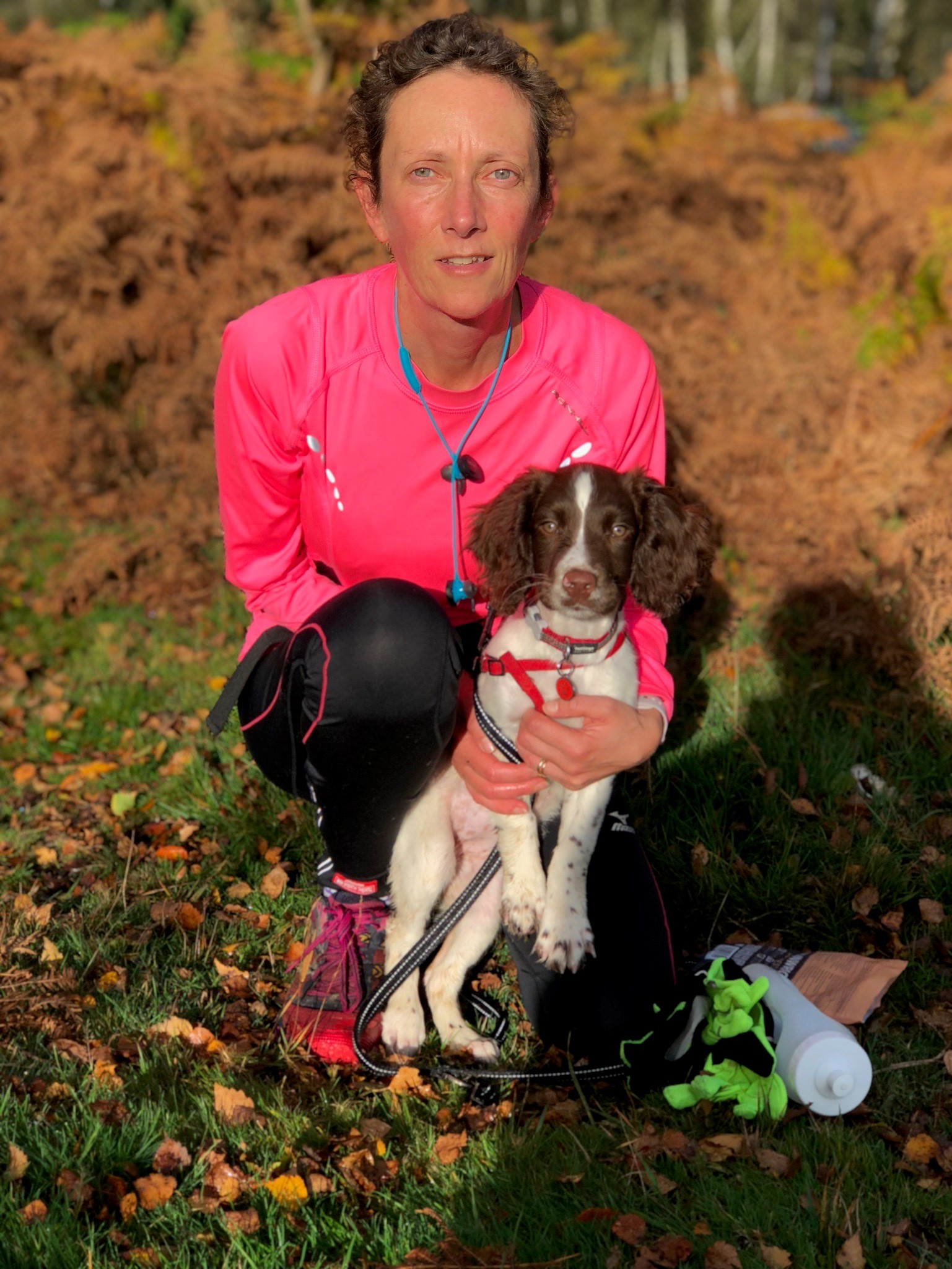 I organised a sponsored Little Legs race where the children all wore pink t shirts and ran a certain distance around the school field depending on their age. After the medals were given out, the parents joined the children to do a walk of honour around the field. We then all gathered in a circle ready for the in-memory balloon release. It was emotional yet positive and after that the kids were much more open about cancer. We raised quite a bit of money too.

Over the next five years things got back to normal. I was taking tamoxifen, going to work and looking forward to the future. I continued to fundraise for breast cancer charities by running the Race for Life, completing a half marathon and participating in the Moon Walk twice. The lead up to every annual check-up would make me anxious, although I wouldn’t show it. I would get the check up before Christmas and the results in January, so I spent the whole Christmas period with a sense of uncertainty.

Helen got to her five years clear and we celebrated at the local pub. Knowing it would be my fifth year the year after, a few of our friends started asking whether I would have a celebration too.

The results of my next annual mammogram showed a suspicious area. It was lobular carcinoma in situ, a benign breast change indicating an increased risk of developing invasive breast cancer in the future. Usually the recommendation is annual mammograms and being more breast aware. As I was already on annual mammograms, I wanted to have a mastectomy. I only had one breast anyway and I wasn’t comfortable just watching and waiting.

I opted for a bilateral DIEP flap reconstruction in the same operation. The wait for the operation seemed to take forever and was filled with various appointments and counselling about the surgery itself. In fact, it was 12 months from the initial consultation.

The operation which utilised my abdominal fat and muscle, lasted eleven hours. I had been warned by the surgeon that it would be incredibly painful, but when I woke up I felt like I had been laid on the motorway for eleven hours. Even more alarming for me was that it was not only physical, it was somehow emotional too. I didn’t want to interact with anyone and even walking ten steps felt like an impossible task.

I’ve since spoken to patients considering this type of reconstruction and I make sure they know that it is no easy ride. I explain a lot of things in a different way to my breast cancer patients now. It helps that I can talk them through what to expect when they first go to the hospital and give them advice from my own experience.

I returned to work in 2010 and then in 2015, I started an MSc in medical education. Three years later, I had graduated with a distinction. My next goal was to get to ten years post diagnosis. At the start of 2019, I made the commitment to run my first marathon.

Around Easter time, I started getting pain in my breastbone and assumed it was a condition called costo-chondritis. After a six-week course of anti-inflammatories, there was no significant improvement and the alarm bells started ringing. As my breast clinic has a patient initiated follow up, I called them directly to arrange an appointment. In the meantime, I had a chest X-ray and blood tests.

My consultant ordered a CT scan and bone scan and I was called back for an appointment at 4pm one Friday. She began with ‘I’m afraid’ and I just burst into tears. There was evidence of spread in the lungs, bone marrow and recurrence in the right reconstructed breast.

Hearing that I had secondary breast cancer was even more devastating than getting my first diagnosis. I didn’t think I could go through it all again. It felt like a life sentence. 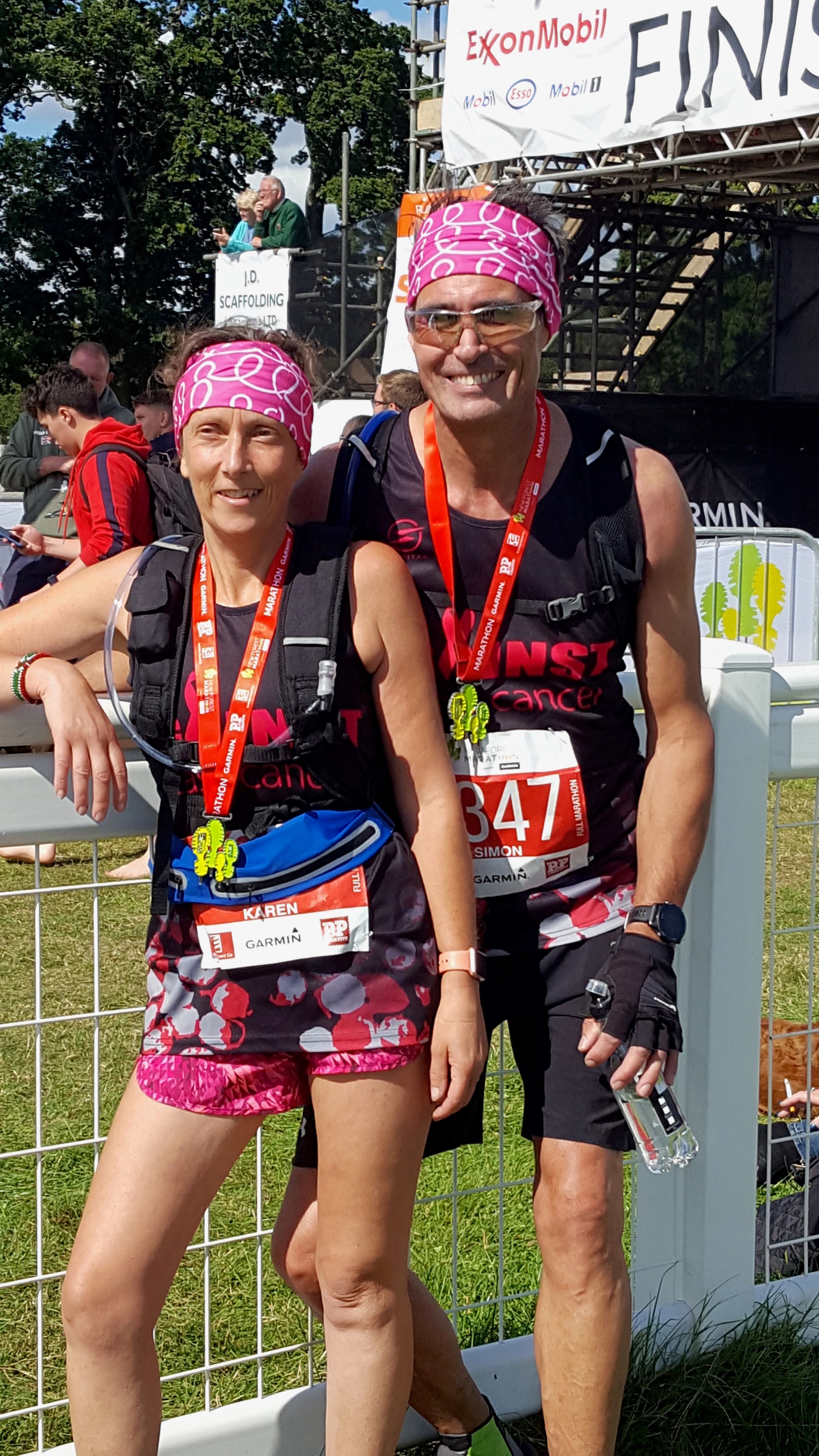 karen at the finishing line with Simon

That weekend I was beside myself. My eldest daughter was away in Africa doing some aid work and I had no contact with her for the next week. I was terrified someone would tell her before I could see her.

The initial blood test results showed I was menopausal, so my oncologist prescribed Letrozole whilst we waited for confirmation of the HER2 status.

There was just 6 weeks to go until the New Forest Marathon. I decided that whatever was going to happen, I was going to run the marathon and raise money and awareness for secondary spread breast cancer. I contacted Against Breast Cancer and set up a Just Giving page. I am so lucky that I have so many friends and work colleagues who were all prepared to support me. My running partner, Simon, was fantastic and told me that whatever happened he would get me over the line.

Two weeks before the marathon, the results showed the cancer was HER2 positive negative so I started palbociclib (Ibrance), a targeted immunotherapy prescribed in tablet form.

I didn’t know how I would respond to the new treatment. What if it gives me really bad side effects?

My family came to support me at the marathon, along with some friends and work colleagues. Running down the first stretch felt magical, we had run ahead of the rest of the group and as we arrived at the bridge, we could see all the supporters and press and hear the cheers of encouragement. It really fired us up. The motivational posters and beautiful scenery made it even more enjoyable. Every 3 miles we would alternate between a slice of mars bar and a dextrose tablet which helped to break the marathon up into chunks. When we neared the finish, we held hands, put on our best run and waved to everyone! Crossing the finish line after 4hrs 35 mins was the best feeling, I was on such a high.

I’m on my second third round of immunotherapy now and still working, running and singing in my local choir. My coping mechanism is to keep busy, not over think things and make the most of every day.

Knowing I have positive goals to work towards is very important to me. I’d much rather be focusing on that than the results of the next CT scan. That’s going to happen anyway, and I can’t do anything about that. Rather than counting the days, I think about the things I could achieve whilst I’m feeling well.

Being a patient is hard when you are a GP. Recently, I lost a long-term patient who came to me with a lump in her breast and unfortunately, her breast cancer metastasised quite quickly. Her death was another marker for me.

A vaccine against breast cancer would be the most fantastic development ever. It would hopefully mean that my two girls will not need to live in fear of getting cancer or have to make a decision at a young age to request a prophylactic mastectomy.

Thousands of women’s lives would be different. Together we could change the world. It is too late for me but if I can do anything to make this dream become a reality I will. I now live to run and if I can, I will run to live.

On top of this, Karen is Against Breast Cancer’s first sports ambassador. Not only is she is providing insight on how she trains for her marathons with her blog, she has also helped us produce a patient information leaflet which gives people an idea of what to expect from the moment they find a lump, taking them through what may happen during their first referral appointment, something that has been suggested as an invaluable resource by many supporters we have spoken to.