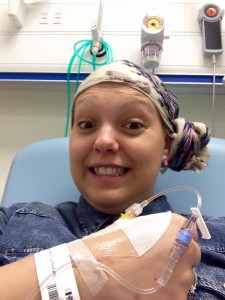 Maintaining her spirits through treatment

Stevie considered herself breast-aware, she routinely performed self-examinations because her Mother had a history of cysts. Upon discovering a lump in her right breast, she went straight to her GP, who thought it was a hormone-related lump and not potentially cancerous – due to her age.

She was asked to come back later in her menstrual cycle and one week later she returned and was sent for an ultrasound, which showed an abnormality.

A mammogram confirmed that something was not right, so a needle biopsy followed. The wait for the biopsy results was horrible. Stevie remembers she went back to work to try to take her mind off it, but found it difficult. She prepared herself for bad news which arrived 10 days after the biopsy.

Aged just 27, Stevie was devastated to be diagnosed with an aggressive (grade 3) Stage 1 breast cancer. Being a fast-growing type of breast cancer, she was fortunate to have caught it very early, thanks to her being breast-aware and routinely performing self-examinations.

Her family and friends were also devastated when she told them of her diagnosis, the only history of breast cancer in her family, were her paternal cousin who had Hodgkins Lymphoma and her paternal uncle (pancreatic cancer). With her mother living abroad, Stevie’s closest friends became her family; they proved a great support. She also spoke to Macmillan nurses and benefited from the ‘Look Good, Feel Better’ campaign, learning about make-up, which she found really useful and it did indeed make her feel better.

Through her Facebook page, Stevie managed to increase awareness of breast cancer and how it can affect younger people like herself by encouraging her circle of friends to perform self-examinations. Several even contacted her to say thank you for the advice after they themselves found abnormal lumps in their breasts, fortunately these were all non-cancerous cysts.

Because her tumour was found early, it was small enough to not require a mastectomy, a lumpectomy was performed instead. A subsequent Oncotype test revealed that the tumour was classified as high-risk of recurrence requiring Stevie to undergo chemotherapy and radiotherapy.

The treatment was difficult, drugs prescribed to alleviate these side-effects of chemotherapy didn’t work, and an infection from her last dose required her to be hospitalised. Fortunately Stevie’s brother was able to support her throughout and she completed her treatment, finishing with radiotherapy as planned.

Happily Stevie has made good progress, her scheduled appointments with her surgeon are 6 months apart and her oncologist every four.

While she considers herself generally healthy, the experience has changed her mentally and her outlook on life is very different now than before her diagnosis. She was an adventurous person anyway, but now experiences paranoia, and worries more. But a new job, and being able to continue to ride horses provided comfort and stability.

Stevie wanted to raise funds for breast cancer research and booked herself and 8 friends onto a husky trail expedition across Sweden and Norway to do so. “I was so excited for this trip, I had been waiting 15 months from when I  booked it. I didn’t really know what to expect! I suppose I didn’t know what I had signed up to!” From Tromso they transferred to the dog sled centre and after no sleep whatsoever on the first night, they made their way to the mountains to start their challenge.

The trek, over 250km, is completed entirely being pulled by a team of 6 beautiful huskies. It involved a mountain climb where fitness was put to the test and each night they were required to set up their own camp in knee deep snow! The following days involved Stevie and her team navigating their dogs and sleds across lakes, bridges, mountains and even through a tunnel before they reached the Ice Hotel in Sweden marking the end of their 5 day challenge.

With her permission, we posted a short film of their adventure.